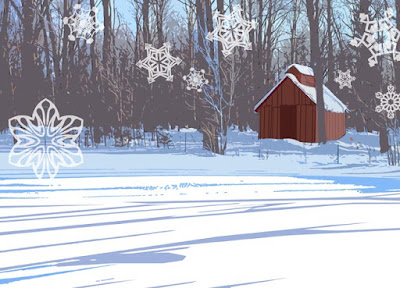 Back when I was in college, some cute boys proudly announced they'd gotten a cabin for the weekend in Southern Ohio.  They wanted my friend and I to go with them.  "You've got to be nuts.  It's winter!", I said.  The boys wheedled and cajoled.  "It'll be warm in the cabin!", they responded.  I wasn't a complete fool.  There are cabins, and then there are cabins.  Some wouldn't be much better than sleeping in a tent staked onto frozen ground.  "No, no", they said, "It has a TV and everything!"  I didn't care about watching TV in the woods, but if there was electricity it had to be reasonably civilized.  I agreed to go.

The days are short in January, and drive to Southern Ohio from Central Ohio was longer than anyone expected, so it was full dark by the time we got there.  We had to hike in the blackness up a steep hill without a flashlight since college boys apparently don't think of useful things like flashlights.  We stayed in the dark once we found the cabin because nothing happened when the light switch was flipped.  I couldn't see anything except sparks while the boys tried to start a fire in the fireplace.  I asked about restroom facilities and was told to just go off the back deck.  Oh yay.  Camping with boys in winter.  There wasn't even a moon that night.  No stars.  Just blackness.  I clutched the deck rail and hoped I didn't fall into oblivion.

There was a fire by the time I got back inside, but for some reason it didn't give off any heat.  We gathered dusty mattresses from the cots and made a barrier around ourselves to trap some warmth.  One of the boys proudly showed me the TV.  "See!  I told you it was here!!"  A tiny portable TV with the screen kicked out and no electricity, but sure, the TV existed.  Should I still call him honest if his honesty was to purposely mislead?

One boy was good with a guitar and I happily sang with everyone else while we drank heavily as college kids often do.  I slept soundly and didn't even hear it when the beer froze on the mantle and exploded in the night.

I woke up the next morning and went outside.  I got my first look at my surroundings.  The large deck had a giant hole in the center that gave an excellent view of the stream 200 feet or so straight below.  Any of us could've fallen to our deaths in our drunken bathroom visits the night before.

When I got past the shock of that truth, I silently absorbed the beauty of the place: tall trees, a frozen waterfall, all wrapped in deep, deep virgin snow.  My silence was broken by a fellow reveler coming out and taking a leak over the deck rail, happily chattering about everything.  Soon, everyone was awake and making a racket.  There were snowball fights, treks up the frozen river, and boyish efforts to bust up the pretty, frozen waterfall.  A good time was had by all but I've maintained my suspicions about boys' promises and winter camping.  I'll give them this though, they did give me an experience to remember.

Oops!  I forgot to post this on Illustration Friday.  Since IF hasn't given a new word yet (Saturday) I'll post this on the site and see if we eventually get a new word.

For those of  you who alread read this and came back looking for a new post, here's a pickle photo.  This is 2 pecks of cukes -- which is a lot.  It's what I did with my Saturday since I didn't have an IF word to keep me occupied :) 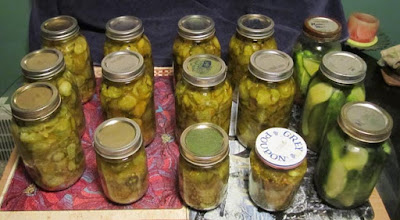 Posted by Linda Hensley at 6:48 AM

Linda Hensley
Thanks for checking out my blog where I have fun with Illustration Friday's weekly challenges. I love comments, so please share your thoughts!