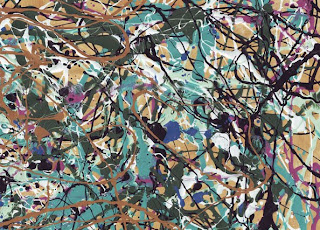 My first reaction to IF's word of the week was regret that I had already used my Medusa picture a couple of weeks ago. Unnecessarily too, because I put a second posting up that week just for fun. But the more I thought of it, this week will have a lot of snake contributions, and I like being different. So, here's a piece I did simply for the joy of it. I took buckets of old paint I had used for projects around the house, and experimented ala Jackson Pollock, throwing and dribbling paint in an exuberant trance state. I think the strands of paint look like they slither around on the canvas -- even more so in reality because the paint is rather thick and 3-D like snakes.

This was fun to do, and it's big. So big, I cut it up into smaller paintings and used the smallest pieces for greeting cards. This part is about 36" x 24". My dog walked through part of the painting and across the floor, so this painting created a permanent addition to my basement floor.
Posted by Linda Hensley at 7:21 AM 9 comments: 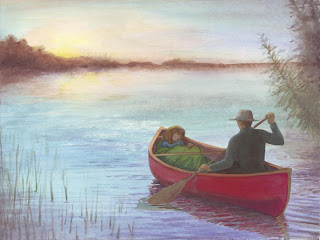 I loved camping when I was a kid. My family went all over Canada, New York, and Pennsylvania. My dad was intent on finding the most isolated places to pitch our tent, and I have lots of stories about our (mis)adventures along the way.

One of my favorite memories is how my dad used to pick me up in my sleeping bag and tuck me into the canoe before anyone else was awake. I woke up to the quiet dip and drip of the paddle and cool mist on my face while the water slid beneath us in a soft, metallic slither of fading dreams.

I loved this. I loved waking up on water. I loved waking up with the frogs and birds. I loved the fact that my father chose to take me with him instead of my siblings. I happily helped him catch breakfast, and enjoyed coming back to the campfire where Mom was making coffee and eggs. I still love fried eggs and fish for breakfast.

Seeing my dad paddle in the mist was something I knew in that moment I would remember. I experienced it as fully as I could. I paid attention to the cool beads of mist on my cheeks, the call of the first bird across the lake, that drip, drip of the paddle before it sliced into the water for another stroke, the force of each stroke shooting us forward then slowly fading before the next stroke. The warmth of my sleeping bag and the peaceful expression on Dad's face gave me ultimate security.

My dad died young, our family quit camping, and home wasn't peaceful, but I'm left with a memory that matters. It was a perfect moment in the paddle's water drops and beads of Canadian mist.
Posted by Linda Hensley at 7:09 PM 19 comments: 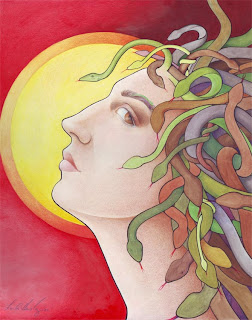 It's a dark, dreary day in Ohio, and I've had to fight myself to do what I'm "supposed to" do. I'd much rather share a stream of consciousness that started when I saw Erica's blog http://ericalack.blogspot.com/2010/05/equipment.html and her entry for "equipment". In that stream, Roberto made a comment that it reminded him of Mucha.

I like Mucha, and I thought about making something on those lines myself. I mentioned this to a friend, and she asked me to send links of Mucha's work. I also forwarded the links to another friend, who responded that he was reminded of Maxfield Parrish. He included links which I then forwarded to friend #1. Spilling out of these forwards were some links for N. C. Wyeth. All of these artists are easy to search online, and I encourage you to do it. 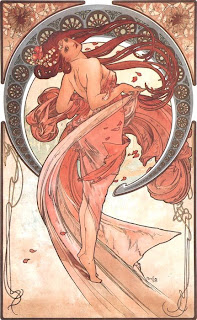 Talking art with people who love art is fun and gets my creative juices flowing. Sharing observations about the connections to Artists A, B, and C let's me see how they were each influenced by each other, and how each inspires me.

Alphonse Mucha: July 24, 1860 - July 14, 1939
Mucha was a Czech artist who lived in Moravia, Munich, Vienna, and Paris. He did remarkable paintings, but is best known for his advertising art which spawned the Art Nouveau movement. He credited his influences to Czech art and his inner sense of spirituality. His advertising style is characterized by beautiful women, decorative backgrounds, and elements from nature, especially leaves and flowers. He used long, fluid lines, and a deceptively simple way of drawing. His anatomy was spot on, and despite simple outlines, the shading was subtle and effective.

Maxfield Parrish: July 25, 1870 - March 30, 1966
Isn't it interesting that Parrish was born 10 years and a day after Mucha? Parrish was an American artist who was also fond of painting pretty women in a deceptively simple way. He loved grand subjects and grand landscapes. Parrish had a fascination with patterns, and often draped his models with them. 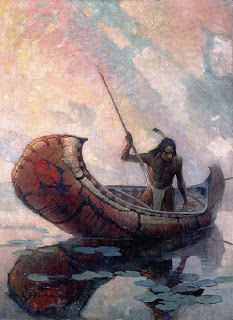 N. C. Wyeth: October 22, 1882 - October 19, 1945
It isn't much of a stretch to go from Parrish to Wyeth. Another American, Wyeth's monumental landscapes, colors, and romanticism contribute to his lasting popularity.

All of these artists had a love of nature that shows in their work. All of them had a sympathetic tone to the ways they portrayed their models. If pretty girls or Indians were the subject, you get the feeling that the artists loved them, or at least loved the idea of them in a romanticized way. They all thought about light and color. They all achieved fame in their lifetimes, were alive at the same time, and they had to be aware of each other since they each did things for advertising and print.

"Equipment" seemed like a dull word to me this week, but I've enjoyed looking at other people's contributions to the topic -- even though Erica admitted her submission was a stretch for the word. But when it really comes down to it, our greatest equipment is our minds, the influences in our lives, and the paths that previous artists paved before us.

I hesitated to put something of my own on a posting of artists I admire, especially since I already posted something this week, but hey, it just wouldn't be right to play on IF without following the rules. Think of Medusa's snakes as ideas and influences coming out of her mind. This is an older piece I did in colored pencil while thinking of Mucha. 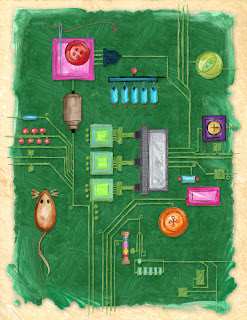 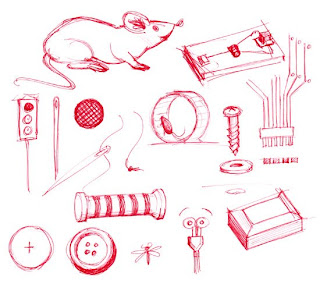 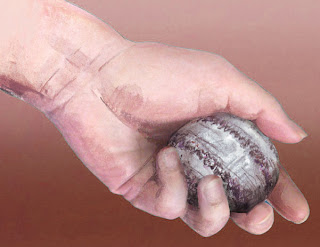 The obvious answer to this week's IF challenge is Joan of Arc facing the Burgundians, but I started to think about fearless people I've known in real life. People who aren't here any more because just like Joan, they didn't have a healthy sense of fear. People who died too young. Jewish people put a stone on a grave a year after a funeral. It hasn't been quite a year, but it's time for me to put a stone on Andy's grave.

I don't remember meeting Andy. He was just always there, always a friend to my youngest brothers. He laughed, he smiled, he went for things with such full force that I just had to smile and laugh with him.

When he was older, he stopped by my house once in a while. If he was hungry, I fed him. If he was tired, he crashed on my porch swing. When I had a car I didn't know how to fix, I gave it to him. Sometimes he'd show me his sketchbook and ask for feedback. He had talent, and I wish I had one of his drawings to remember him by. He found comfort at my house when he needed it, and my heart was happy when he came.

In a way, I always knew we were alike, but I never bothered to find out why. When his obit was published, I found we shared the same birthday. Maybe that's why we could spend a quiet afternoon together without talking. Just being around each other was enough. We appreciated each other in a way we didn't want to talk about, but at the same time, we knew each other's hurts. We were a safe place for each other, and even if he didn't come over very often, my door was always open for him.

He died as a daredevil on an ATV at night. Somehow, it seems fitting that he died going all out, but I'm still dealing with the shock of losing him so young. 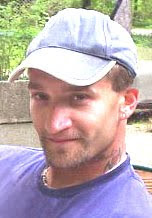 It hasn't been a year yet, and I'm not Jewish, but I'll borrow their tradition because I feel a need to put a stone on Andy's grave. He was buried in a beautiful place overlooking the river we both loved. Maybe everyone else will post pictures of heroes this week, but I'm lost in thoughts of "fearless", reckless, and loss.

The drawing is in pastels with some fiddling in PhotoShop. It's been a long time since I've used pastels, but chalk just seems appropriate for a life so quickly swept away.