Lake Farmpark is a demonstration farm celebrating Ohio's farming heritage. It is part of the Lake Metroparks park system in Lake County where I was Art Director. Most things at Lake Farmpark are "old-fashioned".

This piece was created to launch the facility to the public and potential sponsors. It is a bi-fold folder with inside flaps which hold a brochure, business card, and informational step downs.

The art for this was old-fashioned too. Painstaking rendering with Prismacolor pencils was insane. One of the joys of being Art Director is that I could assign myself a task like this. One of the miseries is that meant I did a lot of this on my own time after hours because I wanted to do it, and didn't feel it was fair to do it on the parks' time when quicker methods would've worked. 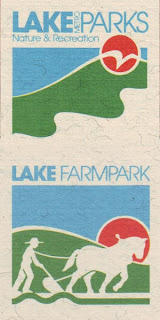 A lot goes into a project like this, and that doesn't even count in the major display I designed for the Cleveland Home and Flower Show to launch the campaign. (Though I am happy to say we won awards!) I researched what the facility would be because it didn't exist yet. I wrote copy and got it approved by staff, committees, and the board.

I had already designed the Lake Metroparks' logo, and created a separate, but complementary logo for the Farmpark -- which of course meant going back through the layers of staff, committees, and board. Bidding out the printing and hovering over the press checks was both fun and anxious for me. I cursed my own district-wide policy of printing only on recycled paper. The stock absorbed the ink, and many of my lovely Prismacolor details were lost. 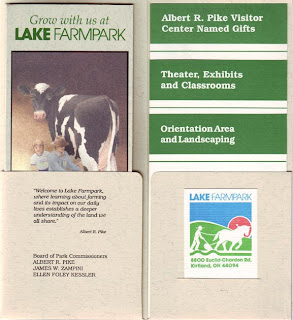 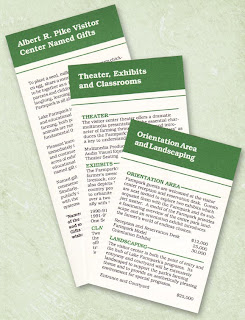 Sometimes I look at projects like this and think they're wonderful because I know how much I put into them, but reality is that other people often don't understand or care. This piece was successful, and that's all they really care about. Lake Farmpark is known in the region, and I had something to do with that success. I went there for a farmers' market last week, and the drive is lined with two rows of banners of the logo, my logo. I felt a little surge of happiness.

The Prismacolors are getting dusty. I just don't love them any more! 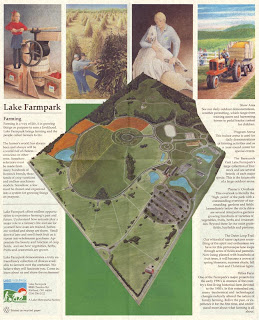 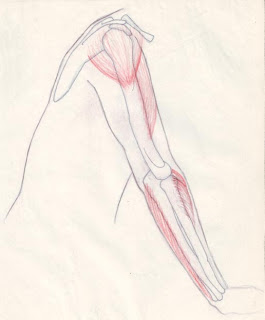 When I went to college, there were 2 teachers charged with teaching anatomy to freshmen, and they had very different schools of thought about it. One teacher had a textbook approach to making students memorize body parts. I'm glad I had Mr. Larrabee instead. We drew from models, then located the bones and muscles in our drawings. I found this extremely helpful because prior to this I had only thought about the outside skin of the people I drew. This technique did a lot to flatten my ego about how well I thought I could draw at that time, but it also made me a much better artist.

Anatomy class gave me heart palpitations at first. I stopped in my tracks and did the "uh, uh, uh" the first time I saw a naked woman smoking outside of class. My suburban/rural upbringing must've been obvious because she rather casually put on her robe while I tried to scrape my jaw off the ground. She didn't bother to tie it though. My 17-year-old self will never forget her sagging breasts, stretch marks, and C-section scar. At that age I didn't really understand gravity, and I'm pretty sure the stretch marks and scar promoted my feelings about proper use of contraceptives. Later on, I laughed when I saw new crops of freshmen staggering in shock of their first naked models. I wonder if teachers ever get tired of seeing freshmen at their first anatomy class? 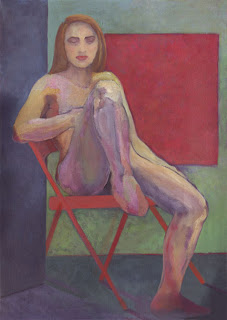 I think a lot of people never get to live that memorable moment or learn basic anatomy. Here are some basic rules to live by, and I think they apply no matter what style an artist is working in...

1. Arms and legs have straight bones inside of them. Okay, if you really want to get into it, there's 2 major bones in the forearm, and 2 in the calf, but let's stick with the basic principle. If you're trying to draw something that looks vaguely human, you should be able to draw straight lines from shoulder to elbow, elbow to wrist, hip to knee, and knee to ankle. In other words, avoid breaking bones in your subjects.

2. We've gotten used to distortions in photos, but viewers are less forgiving when they look at art. If a leg looks small in a reference photo, does it look like a deformity in your drawing? If you're going to make a hand huge, do it on purpose because it's aimed at the viewer. In general, body parts should look like they belong on the same body.

3. Avoid cutting off hands, feet, arms, and legs with the edge of the picture. Doing so makes your subject look like they've had an amputation. It makes people uncomfortable, even if that discomfort is on a subliminal level. Especially avoid blunt crops at joints, and show both arms and/or legs when it makes sense to show them. Otherwise the absence of a limb can also look like an amputation.

4. Muscles are convex, meaning they bulge out. They never curve in. Think of a bicep. Every muscle acts the same way, just on a lesser scale. And remember, the muscles attach to the bones inside. Imagine beginning and ending points for those muscles.

5. Practice makes perfect. Find people and pictures to study. Get an anatomy book for artists, but avoid fashion photography. That has been highly distorted in PhotoShop.

Rules were made to be broken, but if you break the rules, know what you're breaking and why. 5 rules seemed like enough for this posting, but I'd be happy to hear any other suggestions people have.

And how this ties to "acrobat"? Because basic anatomy is essential to trapeze artists, sports figures, and dodging whatever is coming your way. Both pictures are from college days. The painting is oil on canvas.
Posted by Linda Hensley at 3:52 PM 30 comments: 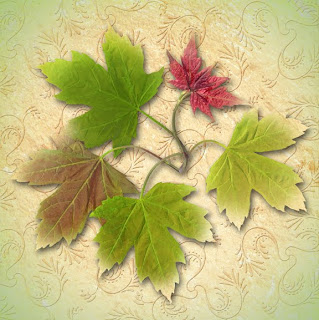 The Byrds sang "Turn, Turn, Turn" straight out of the Bible, except for the last line. The music is by Pete Seeger. The Byrds' version was released when I was a very little child, the Viet Nam war was going on, and I couldn't understand why my dad railed against hippies for saying "make love, not war".

A time of love, a time of hate
A time of war, a time of peace
A time you may embrace, a time to refrain from embracing

I argued with my Sunday school teacher Mrs. Blazy about this song. I didn't want to accept that God sanctioned war or hate, especially when the horrors of Viet Nam were on TV every night. I'm sure I was responsible for some of Mrs. Blazy's gray hair for this and other religious differences.

I have an ongoing war against the maple trees that try to reforest my yard. I pulled these in spring, and thought their deaths ought to count for something, so I scanned them and did a lot of PhotoShop because I was studying new techniques. The original scan is below just to show that I actually did some work to get it to look like this.

I sang the song while yanking the baby maples. I can't help myself. It's a good song, and I'm not going to live in a maple forest with squirrels throwing things at my head and eating my fruit before it's ripe. Okay, there's nothing I can do about the squirrels short of shooting them, and I'm not ready to take that step... yet.

Everything changes. David Crosby isn't the fresh-faced boy he was in the '60s. The maple leaves will be changing colors soon, then falling, then snow and bare branches before I have a new crop of maple seedlings to pull out. There are a lot of proverbs about change, but this song speaks to me most because I find the truths in it so uncomfortable to deal with.
Posted by Linda Hensley at 7:24 AM 25 comments: 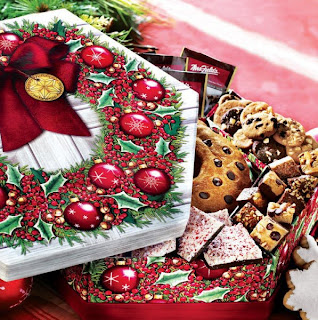 I had a job making pretty boxes for chocolates and bakery products. This box was made for Mrs. Fields as part of a holiday series. I'm happy to say this series was so successful, I created new art for it every year.

This art started out as pieces of watercolor that I scanned and morphed in PhotoShop. I keep the elements on different layers because there are always changes. The background door changed from red to green to weathered white before the customer was satisfied. All of the elements in this piece were created from very little actual painting. For instance, the berries were created from just two bunches. Copy/paste, copy/paste... except the Creative Director for Mrs. Fields is very observant, and had me alter the highlights on every berry so it showed the light source coming from one direction. Good call on his part. Silent groaning on mine. That's a lot of berries!

Even something like the bow was created in multiple layers. I painted a solid bow, tried out different colors, put a brocade pattern over it, and played with the shadows and highlights to match everything else. Even the tag attached to the bow took seven layers: background colors, star, text, grommet, and string.

It has to be this way in a corporate world. I loved working with MF's CD because he has a good eye, makes useful comments, and appreciates good work -- but he is only one cog in the corporate world, though a very important cog in that wheel. My art went to committees of people I never spoke with, and often returned with comments like "Put teddy bears in it" because somebody's wife likes teddy bears. Having a great CD can keep the teddy bears out of things because the CD can defend your work when you can't. 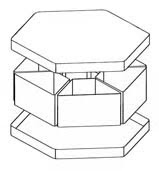 All of this is just the domestic side of business. I also created schematic drawings and printing directions for Chinese manufacturers, often for someone who doesn't speak English. I don't plan on learning Chinese, so we often had to rely on computer translations, which can be like talking through mud. Numbers and drawings they understand.

Samples of the boxes would come from China, product samples came from the customer to see if they fit properly, and I fended off my coworkers' appetites long enough to measure things. I loved getting samples. I really like Mrs. Fields' cookies, but I also got the most decadent chocolates from some of my customers... Uh, excuse me... I started having chocolate flashbacks.

Once all of the above was settled, I created final art for the printer. I originally started out just doing layouts, but when the okay came through for a project, they wanted it out the door immediately. It became easier to work on elements of the final art through the approval process, and adapting it to the final die lines.

When I started this blog, I had the best intentions of trying to say useful things to other artists. I hope this gives some insight into what it's like to make packaging art. I'm open to other ideas of what you'd like to see in the future too. I love getting feedback!
Posted by Linda Hensley at 8:47 AM 34 comments: