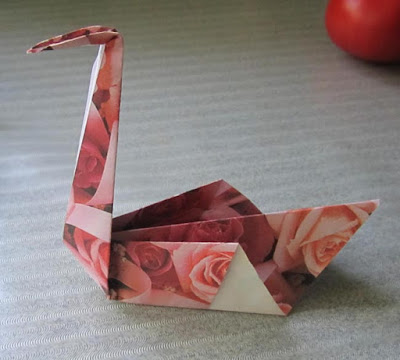 Mom used to make a origami swans.  Us little kids gathered around in rapt attention as she folded the paper.  You know, that's when parents still had magic powers that we could only aspire to as we grew.

I should probably write something about Mom now but she hates that, and besides, I had a vivid dream of Dad this morning.  He told me something that I can't remember now, and then he sang.  It was like he hadn't sung in a long time; he was really rusty and his voice cracked.  He was young in the dream, younger than I ever knew him.  I noticed his crooked teeth and he acted self-conscious about my noticing. 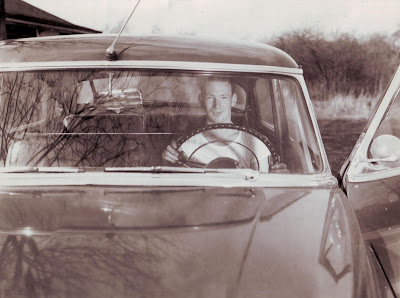 I've been wondering things about Dad lately.  What did he feel and think?  What motivated him?  I've only written the pleasant memories of him on this blog, but our relationship was complicated, and I've been trying to put old issues to rest.

I wonder if he really came back to me in this dream, showing me his insecurities, letting me see what I didn't, couldn't see when I was a child fascinated by paper swans.  It didn't matter to me if Dad had crooked teeth.  I loved listening to him sing, and I assumed he could always belt out tunes with operatic quality and volume.

He was 45 when he died in a sudden accident when I was a teenager.  I never had the usual opportunities to know him more fully as I became an adult.  Who would he have become if he had lived to a ripe old age?  What would our relationship have turned out to be?  Would I like, understand, respect him?  Who would he vote for in the presidential election?  (I suspect the Green Party.)

I saw him as a completed picture.  I know he was skinny when he was young, but he was brawny and strong when I knew him.  He could do pushups from a handstand, even with a kid or two hanging on him.  He was charming and got along with everyone.  I saw women batting their eyes at him and never thought there might've been a time when he felt awkward with girls.

All of us carry the skinny (or fat or whatever) kid within our adult selves -- even parents, grandparents, teachers, and whatever other authority figure we meet when we're children.  All of us encounter a time when we look at our parents and think "that's cracked!" when they something that is clearly just plain wrong.  There's a time when we realize Mom and Dad aren't just taking a nap in the next room, and Grandma and Grandpa aren't napping either.

Then, there's the time that we see the crooked teeth and feel some sympathy and understanding that our parents are flawed humans, just like we've got flaws and insecurities.  We see the path they set us on when they controlled our lives is a path that we can choose to follow or not.  Origami swans are just paper, and we can fold them too.

Next time I dream of Dad I'd like him to sing like he did when we took cross-country road trips and when he was working in the garden... but even so, I thank him for letting me hear his voice when it cracked.

It’s easy to make a mountain from a mole hill.  Lately, I’ve been thinking about how we make mole hills from mountains.   They’re so much of the landscape we can’t see them anymore.

A boyfriend was cooking dinner once.  "Can I help?" I was given a pile of green beans to prepare.  I did it the way I was trained, snapping each end and pulling the string.  He grabbed a handful of beans, and whacked off the ends with a knife.  I was shocked.  My world changed in an instant.  Really, why painstakingly string beans?  I told Mom about this epiphany and she said, "But that's the way it's always been done!"  A side discussion of sitting on porches with old ladies, but in the end we agreed grocery store beans aren't very stringy, and we won't die from cut ends, though Mom still prefers it the old way.

It never occurred to me to question my green bean training.  Now apply it to something that matters.

I started wondering what other mountains I’ve made tiny.  It’s hard to know because our perspective is so skewed.  You can point at something like women’s role in society through the millennia and wonder how many women actually stopped to wonder if it was a good idea to cripple their daughters by breaking their feet for foot binding or giving them genital mutilation.  It all seems so obviously abusive now, but I bet millions of mothers just thought that’s the way things are.

Are we still crippling ourselves?  Even though the wounds are invisible compared to foot binding, aren't we still keeping people down in countless ways?

America has about 3 more months of political craziness before the election.  During that time we get a chance to see impassioned people spouting off their dearly-held beliefs.  Some of their invisible mountains will be obvious to a lot of us.  The white supremacist yelling about welfare mothers and immigrants had to be taught white is best and everyone of color has to be feared and kept out.  But what of our own beliefs?  How many of our own thoughts are flawed?

And really, I'm not talking politics or racism.  I'm trying to explain that I've been trying to figure out my own faulty thinking on a very personal level.  What do I believe that hurts my own success and happiness?  For instance, I've been taught that my value in the world is measured by what I do.  Whether that's my creative output, giving of my time or money, whatever, whatever.  I bought into this, but it's a skewed view.  I bet I have a lot of them, and I bet you do too.

Sometimes you just have to find someone who cuts the ends of beans with a knife to see things differently, to find people who haven't bought into your belief system, especially people who are positive and uplifting.  It’s like the old saying about what you water in your garden.  If you water weeds, you get weeds.  I prefer tomatoes.  I prefer being around happy people.

As for the mosquito, I doodled while watching a show about viruses and thought about how something so tiny can eliminate life as we know it.  Maybe I should watch happier tv shows too?
Posted by Linda Hensley at 7:15 AM 21 comments: