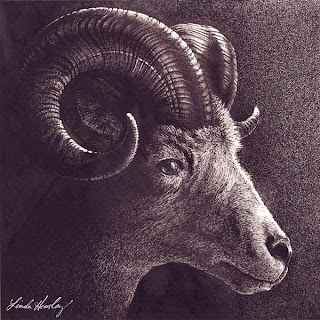 To submit is to be submissive, and that's something a lot of us have been fighting against for centuries. Submit to your parents, spouse, teacher, boss, church, God... We're told to surrender so often, do we even know what our personal will is any more? This can create a lot of unhappiness, but helps society run smoothly, and isn't society more important than any of us mere individuals?

I was talking the other night about Dorothea Davis, "The Sheep Lady". She was one of my personal heroes, and anyone from my neck of the woods remembers her. She inherited a prime piece of property when the area was less developed, and she refused to move along with "progress" when progress absorbed everything around her. The city tried everything to get her to move on, but she fought them in the courts for decades -- and won.

Whatever people might've said about her muddy sheep pulling out the grass, huddling under trees, or wandering into the main street, The Sheep Lady was always called a "lady", and that used to mean something. She was educated, polite, and gracious. She was our librarian, and her lanolin soft hands were beautiful as she wrote out due dates on cards tucked into the backs of our books. She also had a fierce mind, and didn't give in to the powers that be who wanted her messy sheep out of their pristine suburb.

I'll never forget sitting in her kitchen and drinking tea from a fine porcelain cup while a sheep butted its head against my skinny legs, and more sheep pushed through the open doorway. I tried to balance the saucer on the little table and worried about breaking the cup while Dorothea pleasantly discussed my future and the need to follow my talents and interests. I suppose she asked my mother to bring me over because as the librarian, she knew I was different. I took as many books as I was allowed every week, and didn't stay in the children's section. Maybe she knew I was a younger version of herself? If I had a sheep farm, I wouldn't sell it to the city bullies either.

They condemned her house after a fire, and she slept in her car while volunteers rebuilt it for her, minus a fireplace. I wasn't the only one who admired Miss Davis. She died 7 years ago, and people still talk about her with warm affection. Some day I hope I can be remembered with a bit of what Dorothea left in the world. She never surrendered, and lived the life she wanted to live. She died on the land she fought her entire life to protect, surrounded by her woolly friends.

If you have memories of The Sheep Lady, I'd love to hear them!
Posted by Linda Hensley at 7:20 AM 42 comments: 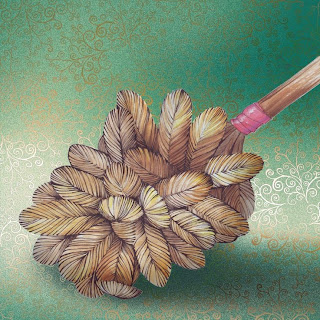 One of my early jobs was at an art studio. It was the good old days when illustrators, designers, retouchers, and production artists all worked in the same building. We laughed and played while we did the serious work of selling stuff we really didn't care much about.

One of those products was a feather duster. A dull product if there ever was one, and this didn't even have feathers, just plastic bristles. Someone named it "Webster", and the creatives had fun playing with it. We put a face on it, and it often appeared around corners to watch artists at work. Our play turned into memorable packaging with a funny face wrapped around it. Awesome! Brilliant! Lots of projects and money resulted for the studio. To be clear, this was another artist's work. I'm just passing on the process of the inspiration. I did however take part in the mock battles we had with them when the product samples came in. 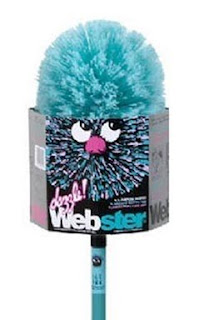 I miss the old guys and going to work with people who play. I miss Brian's collection of model airplanes spinning in the warm air by the heating vent. I miss the camaraderie of going to bars after hours. I miss learning from the masters of the craft. I'm fortunate to have had the opportunity to experience that moment in time.

It's tougher to dust myself off without my happy companions. I've gotten into comfortable, nonproductive habits, and my life needs stirred up. Bills need paid, and I need to kick my muse into gear. Besides, I'm happier when I'm productive.

I suppose there's lots of people who don't value social networking, but we can't all live in vacuums, churning out brilliance in the privacy of our own homes every day. Play matters. Creative competition matters. Feeding off of each other's ideas helps all of us to go further than we can go alone -- and makes the journey so much more rewarding!

As for the illustration... let's call it virtual housekeeping. I don't feel like actually cleaning house today!! 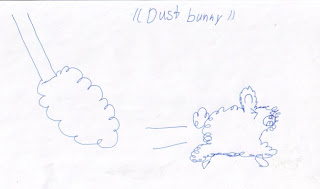 This is my niece's interpretation of "dusty". I love the bunny's face!
Posted by Linda Hensley at 1:05 PM 35 comments: 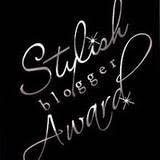 My first blogging award! Thanks Michele! You can see her blog at Mushroom Tender. She does some great posts, so I'm thrilled to be included on her list.

As part of the award, I'm supposed to say 7 things about myself...

1. My favorite color is red, followed in descending order by green, blue, purple, orange. I really kind of hate yellow.
2. I'm third of 7 kids. Yeah, 7. I wasn't consulted in the family planning.
3. My great aunt was an artist too.
4. I love dogs, especially my little mutt Penny.
5. I enjoy learning new things, and studying things with my niece.
6. I love water sounds -- as long as it doesn't have anything to do with faulty plumbing.
7. I really want people to buy bath tissue made out of recycled paper to save old growth forests!

Michele already claimed some of my favorite blogs, so check out her site to see her recommendations. Part of the fun of getting this award is that I can spread it around to 15 others, so check out these sites...

Hi to all,
I'm not big on contests that cost much to enter, but here's a new one to me... by entering, you sign away all of your rights, and they don't even guarantee prize money even if you win. Check out this literary agent's blog for more details -- if you can stand it. Reminder to everyone, read your contracts!
Posted by Linda Hensley at 10:45 AM 7 comments: 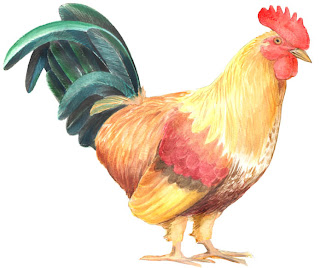 I don't feel much guilt about eating chickens. They're nasty animals with sharp feet and hard beaks -- and dirty besides. Okay, a pretty black and white hen nestled in my arms once, but she was the only nice one out of the whole species.

You might be able to tell that I have plenty of chicken stories, but who really wants to contemplate my terror of flying talons, dusty bedding, and egg thefts? Or plucking singed or boiled feathers either? Or seeing my paternal grandmother demonstrating multiple methods of killing the unfortunates? I'm still living the trauma.

Maybe it's better to think about the chicken soup I made yesterday? Making soup is a contemplative activity for me. Chop, chop, chop, simmer, chop, simmer... It takes an afternoon, and I had stuff I wanted to think about. Actually, chicken soup takes 2 days, because I boil the bones the night before. I deny any responsibility for anyone getting a bone in their bowl. Just goes to show it's real.

All modesty aside, I make the best chicken soup -- with the exception of Mary Lou's Italian wedding soup, but I'm not going to compete with her specialty. My soup is more traditional Ohio than Italian. She gave me some of hers at Christmas, and I'm going to give her some of mine when I see her later today. It's a good trade.

The chicken art is a reject if you can believe it. I had good plans for it too, but nooooooo. My nemesis found black and white clip art which was used instead. Such is the life of an artist! Maybe my fears of chickens came out in the art?
Posted by Linda Hensley at 8:25 AM 45 comments:

I've actually experienced deja-vu. I took an impromptu trip to Washington, DC and got lost. Somewhere in a pretty neighborhood of brick streets and large brick homes, a little dog ran away from a couple of children. I told my companion everything that would happen next as this little, seemingly inconsequential event played out in front of us.

I can't see how this moment in time mattered. I don't know how this odd wrinkle in time happened in the first place, but it makes me wonder about how the universe is stacked together and what role I play in it. Maybe I dreamed it before it happened? But even so, how would I know to dream it?
I was a poor college student at the time. I came home from class, and my boyfriend had packed the car with clothes and supplies, with our bicycles strapped to the back. It was probably his most spontaneous and best idea in our 10-year relationship. He didn't tell me where we were going until we'd hit the Pennsylvania border.
The bikes were great for riding from monument to monument, he had planned for me to see a friend living in Chevy Chase, and we ended up sleeping in a pup tent in a fishing camp on the beach facing the Atlantic Ocean. Lovely, wonderful, my first view of the ocean when the sun came up in the morning, and looking for seashells in the morning mist was magical.
But why did I have deja-vu in the first place? Why did the children and dog matter? Or maybe it didn't matter at all? We get to thinking that our lives are important and the world revolves around us, but what is life really all about?
Sometimes I think of this blip in time and simply remember the feeling of wonder I felt in the moment. Happy, laughing children and a dog running free may be the most important things in the world. The memory gives me a sense of peace and pleasure, and maybe that's enough of a reason for a fold in the continuity of time?
Posted by Linda Hensley at 8:42 AM 29 comments: