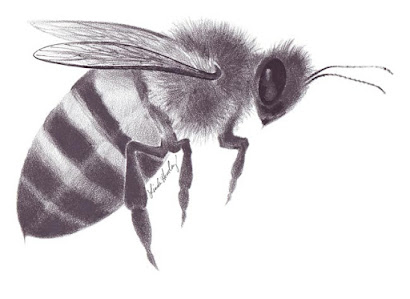 There are definitely unidentified flying things in my yard.  I know this because they attacked me.  I’m pretty sure I’m going to live after the attack, but there was a bit of time when I was wondering if my rapidly swelling knee was a sign I’d developed a bee allergy.  I remembered a time when I was a kid when a neighbor boy got stung.  His arm swelled like a balloon before he was rushed to the hospital.  Maybe that’s why he quit playing at my house?

The summer people behind my yard kept bees.  A long row of stacked boxes were kept right along the property line, though they possessed an acre or two of land.  I suppose this was because we had gardens and apple trees.  Dad didn’t complain.  He wanted the pollinators.  The old man showed up once a year in his bee suit, armed with his smoker, and collected honey.  I liked watching him – from a distance.  I don’t remember him ever giving us any honey.  It didn’t seem fair.  There wouldn’t be any honey without our flowers.  Millions or trillions of bees buzzed through my childhood.  I learned to live peacefully with them.

I took a walk in the park with a friend this week and told him about my childhood bees. I smugly repeated my childhood adage, “Don’t bug them, they won’t bug you.”  Obviously, I tempted fate.

Bro4 has repeatedly directed me to paint my shed.  I’ve repeatedly promised to get around to it.  Some day…  Okay, I finally started moving my pile of old logs so I could get to the shed walls. The logs were falling apart so I got a pitchfork and started tossing them into the yard waste bin.  I noticed a few bee-like things buzzing around, but mostly ignored them.  I noticed they were very fuzzy, a little smaller and darker than the usual honeybee.  I was a little curious, but I was a woman on a mission.  I was finally going to paint the shed.  After all, Bro4 added to my to do list when he dropped off a ladder.  Apparently my next job is to clean out my gutters.  I guess they aren’t supposed to have maple trees growing in them?

Anyway, my pitchfork snagged some weeds off a log and exposed a hive of monsters.  The monsters got upset.  I had a moment of surprise and the monsters took that moment to make a beeline to my tender flesh.  OW, ow, ow, ow, OW!!!  I guess I broke the bee rule.  I didn’t leave them alone and suffered the consequences.  It’s war.  They’re going to die!  Actually, it took me a while to start thinking about drawing battle lines.  I hobbled to the house and tried desperately to remember what to do about bee stings.

I haven’t been stung since I was a kid and I stepped on a rotten apple with a bare foot.  A very angry bee was inside.  I was stung between my little toes, which is a nasty place to hide a stinger.  I tried to remember what Mom did then.  I was pretty sure she plastered my toes with baking soda, or maybe it was meat tenderizer?  Lacking tenderizer, I slathered soda on my extremely painful elbow and knee – and then a spider bit me on my other arm!  Nature hates me this week.

My tender parts are back to normal looking.  I don’t hurt anymore, but I’m going a little crazy from itchiness.  Like I said, I’m pretty sure I’m going to survive this time.  Probably.  It’s too bad I don’t have a bee suit and a smoker because those monsters have to go!  Except?  I had another recent conversation with a beekeeper and said I sometimes think about keeping bees too.  I have space and bees are good for gardens and flowers.  I think I’ve accidentally gotten my wish.  Can I unwish something?

I tried to look up what kind of bees I've got, but I'm just not sure.  Anyone know about bees?