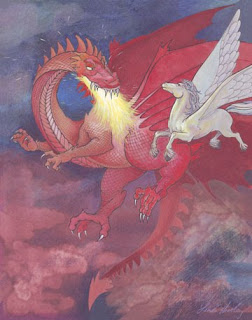 “So,” you might logically ask, “why do it in the first place?” Good question! Because the colors of the Dr. Martin’s is so vibrant and beautiful, they are joyful colors to paint with.

I suppose Pegasus is rescuing Bellerophon from the dragon in the painting, but my connection to Illustration Friday’s word of the week is because I rescued the painting. I had given the painting to my brother because he likes this kind of subject, but between his various moves, the painting ended up in our mother’s garage and started molding in the dampness.

I was horrified by this blatant lack of respect for my artistic gifting. This is especially unforgiveable because my brother is also a painter and should’ve known better, but he is often just as careless with his own work. He also has a very annoying habit of painting over things I really like. I’d rather buy him a new canvas than watch him destroy beautiful things, but let’s get back to the moldy dragon… 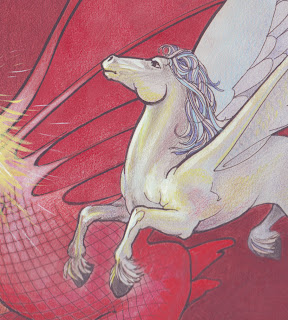 I took the painting home and sorrowed over its pitiful state, without really knowing what to do about it. In the end, I took it out of it’s frame and found that much of the mold was on the glass and mat. That was easily solved with Windex and by throwing away the mat, but I was still left with some mold on the actual painting. I knew that mold can spread if you don’t kill it, but I was also pretty sure that anything that would kill the mold would also destroy the painting. I carefully dusted off as much mold as I could, and then dabbed detergent on the remainder. I lucked out because the mold was only on the background, and the background is washy in the first place. The Dr. Martin’s actually dyes the illustration board, so it didn’t lift as easily as watercolors would’ve done. With careful dabbing with water, thorough drying, and reframing, the painting was rescued.

My brother came over and saw the painting hanging in my bedroom. “Hey! Isn’t that my painting?” he asked. “Not any more!” I responded. He must be punished for poor parental care of my work! But on a different level, this painting is a reminder to me of many things, including my affection for my brother. It reminds me that things can be rescued if you dare to try, that even anti-archival paintings can last, and then there’s always the idea of Pegasus rescuing Bellerophon.
Posted by Linda Hensley at 9:16 AM 4 comments: 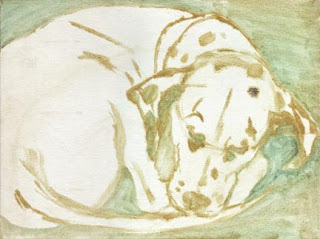 I almost skipped Illo Friday’s word of the week because “expired” isn’t where I want my head to be right now. It brings to mind expired coupons, sour milk, and people who have passed out of my life. I like to make happy art instead of skulls and crossbones, yet the word also nudged me more into creative thinking than the previous words because it isn’t in my comfort zone.

I did this picture as a quick oil sketch on canvas board in preparation for an actual painting. I usually don’t like making fussy, perfect preliminary drawings. I like to wade right in and start painting, especially with oils because they are so easy to move around or erase if things aren’t going well. In this case, I liked the sketch because it seemed to capture the personality of my 16-year-old Dalmatian in a way that I didn’t think a finished painting would. Freya is suspicious of cameras, as you can see in the photo. It’s always been hard to get a good picture of her even though she is a very pretty dog.

Freya is still around, but she’s definitely past her expiration date. She hobbles around like an old lady, makes messes in the house, and generally annoys me while at the same time I’m upset that she doesn’t have much longer to annoy me.

I won’t bore people with adorable dog pictures and stories. Let me go the other way and say don’t get a Dalmatian! I’ve had them for years, and I know that people get the happy little puppies without realizing that that bundle of fur is going to grow into a very strong dog who will run away from home no matter how much they love you or how many treats you give them. They run in straight lines for miles, across busy streets, and down train tracks. They go over or under fences, and figure out how to slip their collars. They demand your attention, and are too damned smart for their own good. They steal the covers off the bed if they think you’re sleeping too long, cry when you go out, and generally act like however much love you can give them isn’t nearly enough. They shed constantly.

They have been over bred, and often have hearing problems, bad hips, and bad tempers. Unfortunately, too many end up in the pound because people didn’t realize what they were getting into. If you want one despite my warnings, check out the web for a Dalmatian rescue in your area, because despite all of these warnings, they can be great dogs for the right people. Preferably people who live in the woods without fences or small children. 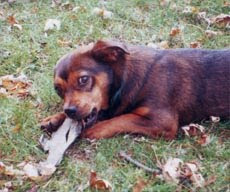 My brother gave me Penny when I said I was tired of spots and wanted a small, brown dog. She likes to go to the park too, but can’t walk more than a mile or two without getting tired. I’ll probably break down and get more Dalmatians eventually. 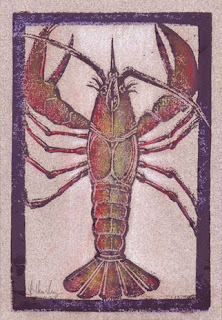 This is a print on art paper, made from a design cut into a linoleum block, with pastels on top. The carving on the original block is shown below. It’s a great example of how going to a garage sale can provide the creative inspiration for something new. I’ve walked past linoleum in the art supply store lots of times without buying it, but for a quarter at a garage sale, why not?

Looking at the pristine block, my mind wandered around to different things I could carve into it. Linoleum is soft, and easy to carve, but carving isn’t my best skill, and I wanted to keep it simple. I cast around in my mind for a happy image, and thought about childhood and crayfish.

I grew up next to a beautiful river, and spent many hours catching them. They live under rocks, and it took a little bit of skill to get them because they can scoot backwards very fast and get lost in the dust stirred up when lifting the rocks. We used them for bait or as kind of temporary toys. We’d squeal with laughter when they crawled around on our hands, or screeched a bit when they pinched us with their claws. I can get lost in my memories of them because there are so many memories to choose from.

Maybe for someone who didn’t grow up next to a river, they just look creepy? I could see where someone else might look at them as stunted little lobsters that are too much effort to eat, but they still taste good, and the fish love them. 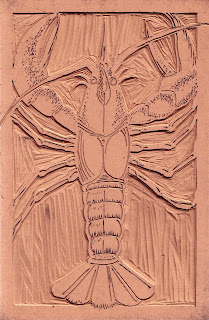 Finding art for Illustration Friday’s word of the week, and thinking about what I want to say about it has gotten me to look at the art I’ve created in a different way. I’m seeing a difference in the art I create for fun from the art I’ve done for work. For instance, I wouldn’t have created a picture of a crawdad for a chocolate company. I wouldn’t have done a linoleum print because I wouldn’t know how that would work out. I need to churn stuff out for money in reliable, tested ways, but I think experimenting is vital. Taking time to play has led me in new directions with my professional art, and made my work more interesting to customers.

And above all, all of this justifies my addiction to garage sales!
Posted by Linda Hensley at 9:00 AM 10 comments:

This was an easy Illustration Friday topic for me because this drawing has been sitting on my table for a week. I created it to remind myself of my goals, instead of thinking of my fears in achieving them.

Bravery isn’t necessarily running into a fire to save a baby. Sometimes I think saving a baby would be a lot easier than picking up the phone and making a cold call or introducing myself to someone I should meet.

Bravery is facing and conquering what we’re actually afraid of, and being willing to really look at our fears in the daylight. When I think about sweaty nerves in picking up the phone, of what am I actually afraid? Odds are, whoever picks up the phone will be polite, even if that person is busy, distracted, or mad at their spouse that day. None of that has anything to do with me. The person might like and want my work, and pay me for it. The worse thing that can really happen is that I get a rejection, and even that doesn’t have a lot to do with me. Maybe they’re looking for a particular style, already have someone, or just don’t have money. 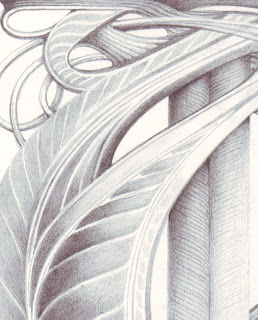 When I really look at these kinds of fears, I can see they’re irrational. I can think back to isolated times in my life when people acted inappropriately and created those fears in me. One man yelled the worst insults and cuss words at me when I said I didn’t want to work for him. That’s one guy out of how many people with whom I’ve talked? Seeing fears and facing them helps me pick up the phone and pursue my goals – even if I still get a thumping heart when listening to the phone ring.

This image came to me in a dream, and I woke up in the night to scribble a note to myself. Life seemed to have a lot of clarity in that moment, and it seemed obvious that I needed to create it.

This is a large pencil drawing, 10” x 24”, on hot press bristol board. I use whatever pencil I find handy, including very grainy No. 2 school pencils. My last boss said “A real artist can make art with anything”. I thought he was being cheap, but I suppose it’s true. The main thing about this drawing is to keep me focused on goals, not letting myself get bogged down with having the right art supplies, or worrying about talking to strangers.
Posted by Linda Hensley at 8:28 AM 6 comments: