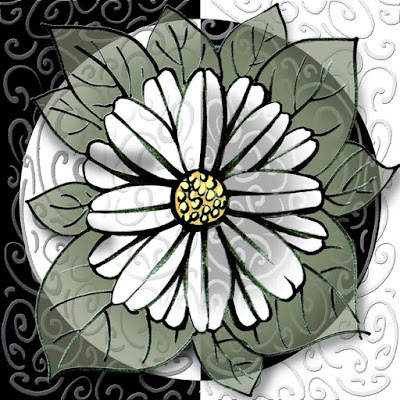 "Half" is an interesting word.  We learned in math class that half means 2 equal parts, but that's not what many people actually want.  They want more than equal, at least more than that person.  That's how they can know they're better than the person who got less.

We can't give away everything donated to the food giveaway as there might not be enough of something for everyone to get an item.  Old ladies will claw each other's eyes out if "She got a pineapple!  I want a pineapple!"  So sorry, that was the last one.  I could cut it in half so you each have some...  "NO!  I want that one!  So much for Solomon's solutions to problem resolution.  An old woman's greed means she gets less goodies but you can't tell her that.  And if I were to find another pineapple for the whiner 10 other women will screech they want pineapples too.  Nope.  No pineapples for anybody.  We'll give them to the shelter or compost them.  The old ladies are happy because they never knew we had any pineapples in the first place.

I think our desire for fairness is built into our DNA.  Monkeys scream like old ladies at a food giveaway if one monkey gets more treats than another.  Children identify equal with laser precision when it comes to cake.  Yet there are an awful lot of people who really think their half ought to be bigger.

I've always had a hard time understanding why some think they're losing if another gets something.  Someone else's success makes them feel bad, and the worst people try to sabotage that success.  It would be more sensible to learn from that person's achievement.  What did they do to bring about this happy result?  Apply that to your own situation so you'll succeed too.  If one artist sells a lot of paintings, that means there is an audience for your paintings, or books, or whatever it is you do.  Someone else's success builds a road for you to ride on.

Success isn't cake.  There's only so much cake.  Success is unlimited like love -- though I realize some people think if this person loves that one then that's love they aren't getting.  I can love a lot of people in different ways.  I don't have to center it all on one person for it to count.

I watched Jordan Klepper video of a woman at a Trump rally who said gay people wanted too much.  "You mean equal?" Jordan asked.  The woman agreed, yes, equal.  "And that's just too much?"  "Yeah."  Well, how do you argue with that?  Someone else told me gay marriage hurt her marriage.  "How?", I asked nicely.  She didn't have an answer.  She just felt like someone else having what she had meant what she had was devalued.

I'm not all kumbaya about this (though it would be superb if everyone loved everyone else and helped everyone else to succeed).  I'm just talking practical sense.  Take your half of what you're due.  Marriages work when the partners each feels they're getting their share of the benefits and the chores.  Good workers do their part and get raises and promotions in a healthy work environment.  Helping someone may come back to you at a later time by someone helping you.  Half a slice of cheesecake with a friend is wonderful.  Call it karma or whatever you like, equal can be great.
Posted by Linda Hensley at 1:55 PM 10 comments: 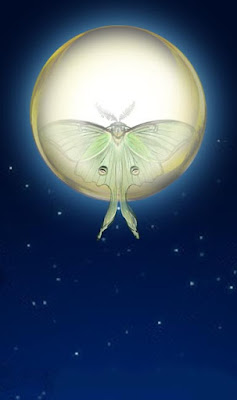 Luna Moths are named for the Roman moon goddess.  Wikipedia says they aren't rare, but are seldom seen because the adults are nocturnal and only live for 7-10 days.  They're big and catch your attention though.

I was pleasantly thinking about Luna Moths when my neighbor informed me he had a homeless guy with a vicious dog living in his yard.  Yeeks!  We spent some time with the cops, who didn't shoot anyone.  In fact, everyone was very polite, but then I live in suburbia.  The squatter was told to pack up his huge pile of belongings and get out or get cited for trespassing.  This obviously deterred my impulse to go looking for Luna Moths in the night and disrupted my peaceful thoughts about bugs.

I talked myself down from all this excitement and tried to get back to moths but a shot went off.  I was unwilling to go outside to see if anyone was dead, spending my time calculating the distance and wondering if a bullet could pierce my steel sided house.  It turned out the homeless guy refused to vacate and threatened someone with the giant, vicious dog.  The threatened man fired a warning shot.  That seemed to finally motivate the squatter to move his microwave and other appliances, a cockatoo, and who knows what else he had back there.

I again tried to fix my mind on moths, but thought about a crazy bumblebee I saw instead.  It was walking around in circles, nothing like usual bumblebee behavior.  A visit to Wikipedia informed me it was infected by a parasite which made the bee leave its hive and walk around in circles before dying.  This earns them the name "zombees".  The parasite lays its' eggs in the bee's abdomen and about a week later the pupae emerge from the throats and heads of the dead bees.  Oh yuck.

How is this my life?  I haven't bothered anybody.  I don't deserve zombees and homeless guys with vicious dogs!

At the same time, I'm not entirely surprised something happened in that yard.  A week or so ago, I called the cops on a couple who seemed to be scoping the property and who tore off as soon as they saw me watching them (twice).  I found an empty pack of cigarettes in my yard in an unlikely place.  I was on high alert, and quite aware others thought I was just a hysterical female to pacify and ignore -- but then I wasn't worried about the cops killing me so I should just sit down and shut up, right?  I'm feeling very sympathetic towards the people protesting police practices.

Watching a zombee walk around in circles may not seem important.  I rather doubt those parasites will breed in my abdomen, but just knowing stuff can be useful in unexpected ways.  An observant artist is a better artist as a general rule, and an informed person is more interesting.

My point is to notice things.  Trust your gut.  If it feels wrong, it probably is wrong.

I ran out of space to actually write about Luna Moths, but if you're interested you can see Wikipedia's info here.
Posted by Linda Hensley at 10:33 AM 8 comments:

A doll is a puppet, right?  Well, close enough.  I've been working on my Barbie paintings and haven't had any close enough words for the week to share them.  This is obviously Equestrian Barbie.

This painting took forever and a day to create.  Okay, most of that was avoidance, but I think that's got to count into things too, right?  If only people paid me for thinking and avoiding!  I don't want to get into all my thoughts about why I struggled on this.  Let's zip straight to the insight I got after the battle with myself was won.  Some people bully their way through life and other people get injured.  We see the bullying and say, "You hit me and I feel hurt!".  It's much harder to recognize the problem when the injury is caused by inaction.  A lot of my sitting around thinking and procrastinating has been spent on this very simple idea (though Equestrian Barbie's sling has nothing to do with someone else injuring her).

I often find the world reflects something going on within myself.  I was thinking of how others' inaction caused me harm while US blacks have been loudly saying white people's inaction harms them.  I find this understandable.  I'm with them in spirit.  I don't want to actually go out and march because I don't want to be tear gassed, catch Covid-19, or deal with city parking, but I applaud on the sidelines.  I'm not alone.  Surveys show most Americans are sympathetic to black people's issues, and while quite a few people have joined the protests, most aren't actually marching.  Does our inaction injure their just cause?  On a personal level, have you spoken up when someone else needed you to speak up?

I can't deal with watching the video of George Floyd dying, but I've seen bits of it.  The cop doing the murdering is clearly doing an evil action.  The thing that I keep thinking about though is all the other cops who allowed it to happen.  George wouldn't have died if any one of those other cops had stopped it.  The system of protecting police misconduct allowed that cop to murder George.  The politicians that allow cops to self-police misconduct allowed the murder.  The apathy of voters to protecting blacks' rights allowed it.  Perhaps the biggest sin in all of this is the inaction.

I'm thinking of all this on the national level and in one-on-one interactions.  Be the pebble that knocks things out of the rut.  Do what you can.

I've been fighting migraines lately, so my apologies for dropping off the net.  Here's a shell for last week's word and a larger view of the Equestrian Barbie painting. 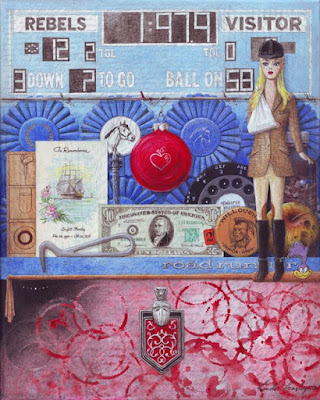