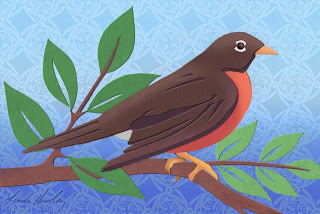 Did I say something nice about the weather last week?! It's hard to imagine as I listen to my neighbor gunning his pickup truck over and over as he tries to unstick himself from his driveway. The bottom of his truck is resting on the snow, and he's a little dimwitted about how to rock himself back and forth out of his current situation.

I had to drive into the city today when the snow was falling 2"/hour. That's a lot of snow, on top of the snow we already had, and all the snow that fell 2"/hour while I was pleasantly dreaming. The freeways hadn't been plowed or salted either. Thankfully (just in this case) everyone is out of work in Ohio, so I didn't have to worry about rush hour traffic while I inched along in a white out. For those of you lucky people who don't know what a white out is, it's when you literally can't see anything except white snow in every direction. It would've made as much sense to stick my head in a bucket of white latex paint as to drive to Cleveland today. 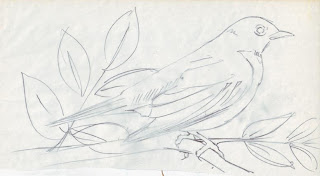 I guess we'll just skip over the part of why I was there learning about how "paraphernalia" is a misdemeanor felony in Ohio. It wasn't my paraphernalia. I don't smoke pot, but obviously there's at least one person in my life who does, and someone I just can't leave in a Cleveland jail. Maybe a year's probation, Alcoholics Anonymous, thrice weekly piss tests, and counseling will end up being a blessing in disguise? 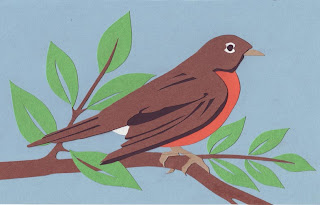 But onto a happier subject...
Yesterday the sky was blue for a little while. There was snow on the ground, but it was the manageable kind. Altogether, not a bad day for February, and I watched the birds outside my kitchen window. Then I realized I was watching a robin. Yay! The first sign of spring! (Okay, I see the irony of this considering today's blizzard, but let's stick with the happy thoughts...)
The robin was hopping around on the snow, and I noticed another robin. Then another, and another, and more. It was a swarm of robins! If one robin is good, then a flock of them must be better, right? I'm ready for good things to start happening now. Okay, maybe after I find my driveway under the 15" or so of snow, then happy things! Alright, maybe after my coronary getting rid of those 15" or so, then happy things! Right?! 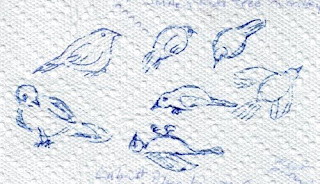 I drew these little sketches on a paper towel today while waiting in the car outside the Justice Center. Paper towels are terrible for doodling. I really need to keep better emergency drawing supplies in the car. The dead robin at the bottom reflected my general attitude after waiting hours for legal things to get processed, but you'll notice most of the birds are up and hopping around.

Ultimately I am an optimist, and as I was cutting paper for this post a certain someone showed up and shoveled the 15" or so off of my driveway :)
Posted by Linda Hensley at 12:36 PM 37 comments: 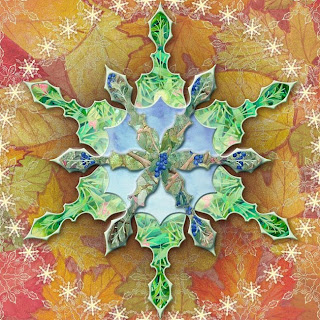 Ohio is actually warmer than Florida! Woo hoo!!! The heavy snow has mostly melted, except for dirty mountains left over from plows in parking lots. Funny how that never gets shown on greeting cards. I took the opportunity to work off some of my winter confinement by raking the leaves I neglected last fall. I only got as far as the first big maple tree, but I'm feeling a sense of accomplishment. 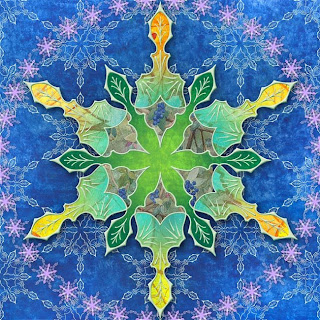 I suppose I could act superior and say I was allowing the leaf compost to nourish the yard, but it isn't true. I just plain didn't feel like doing it last year. I spent last summer and fall fixing my house after a plumbing disaster, and then got blinded with migraines that seemed to go on forever. I can only do so much.

But raking leaves on a warm winter day feels like a blessing instead of labor. Seeing actual green weeds looks like a blessing too. Yeah, I know, they're going to get out of hand before the snow really melts once and for all, but at this moment even weeds are welcome if they're green. Maybe my deer will eat them instead of my apple trees? I had a vivid fantasy about eating the deer when I was surveying the damage. One way or another, I want to eat apples! 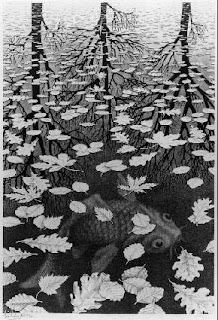 "Layer" made me think of M.C. Escher (b. June 17, 1898 -- d. March 27, 1972), a Dutch artist who liked playing with reality. I admire the way he made waterfalls and steps that led to their sources, and birds that turned into lizards, or maybe lizards into birds, and spheres that can be clear, opaque, or reflective. I can admire the way his mind worked, but I have to admit I've never managed to get a lizard into a bird in any kind of believable way. I can however simultaneously look through and at water. We all have to work within our limitations. Just imagine what Escher could've done with computers! 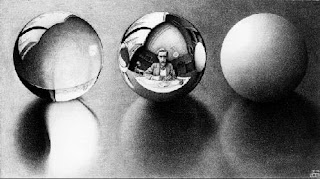 I started the snowflake with something else in mind, but what the heck. It's a study of layers in PhotoShop, and makes me feel like the seasons are moving in the right direction. I'm tired of trying to think nice thoughts about people in the Southern Hemisphere soaking up the sun.
I wasn't that excited by my first effort, so created another color scheme in the hope I'd like that better. In the end, I decided they make a better pair than either individually -- but then again, maybe I've just been looking at this too long? I'd rather go outside and enjoy 54F degrees! In Cleveland, that's swimsuit weather! Yay!!!
Posted by Linda Hensley at 9:34 AM 36 comments: 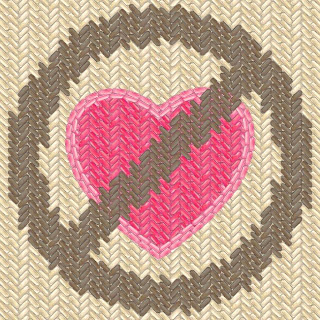 "Sweater"? How does that fit into my carefully planned rant against Valentine's Day? I had amusing anecdotes to share about wrestling my roses away from the senile old woman who lived next door, and listing inappropriate gifts I've received from men, the worst of which was a toaster. Or maybe it was a blender? Either way, men should NOT give kitchen appliances on a romantic holiday, especially when they're the ones who want the toast or daiquiri in the first place.

I also had thoughts about showing all the cool stuff I've designed in the past for the holiday. I've done everything there is to do with a heart -- twisting, turning, stretching, black hearts, green hearts, upside down hearts... the possibilities have been endless. I have examples of clever die cuts, uses of metallic inks and varnishes, and cute attachments, but nooooo... the word for the week is "sweater"!

Okay, I'm adaptable and can do anything. Besides, this is my blog, and if I feel like ranting against Valentine's Day, I can -- and hopefully everyone else will indulge me, because I'm tired of a holiday bent on reminding me that I'm single at this age. And even though I'm quite unreligious, I'll leave off my ranting with one of my favorite quotes from the Bible, Song of Solomon 2:5...

"Comfort me with apples for I am sick of love"
Posted by Linda Hensley at 10:55 AM 30 comments:

My friend Phil read my last post and suggested I ghost a picture of myself over the old photo of my great great grandmother. That sounded like a much better idea than the more practical thing I was working on in Illustrator, so I dumped that project for now and followed his suggestion.

I know I made the comment that our faces aren't new, but I really hadn't realized how much Lizzy and I look alike. It was easy to line up the ghosted image of my face over hers because the placement of our features are in the same places. Our chins, mouths, foreheads, ears are all the same. Yeah, creepy! Good thing so many people said so many good things about her when she was alive! 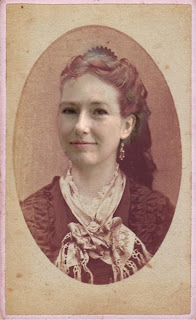 She obviously had better clothes and a better hairstyle than me though, so I made a composite to imagine living in Victorian times.

This was kind of fun even though it did freak me out a bit. Maybe everyone else should do this with pictures of their ancestors?
Posted by Linda Hensley at 10:31 AM 29 comments: 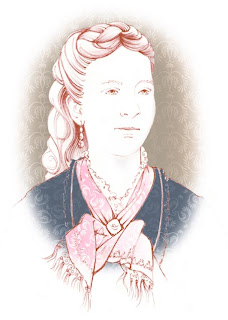 "Reverse makes me think of oppositions. Happy/sad, good/bad, male/female, past/future... and that train of thought reminds me of the time I spent this week scanning old family photos to share with younger relatives. Ancient people long gone still have an effect on young people, even if they don't know it yet. The shapes of their eyes, chins, and cheekbones aren't new. They were on someone else's face 150 years ago. Their faces are going to reappear on young people's grandchildren.

We can't escape our genes or the influences previous lives have had on our own. We can't help ourselves from influencing the younger people who come after us, any more than we can change the color of their eyes. I see my grandmother's face in my niece. Life is lived in reverse and forward all the time.

We're all getting older, every second of every day. Quite a few of us spend a lot of time worrying about it, but worrying isn't going to change reality. All we can really do is leave a mark on the world we live in. I don't have children, so I think about my legacy in other ways than passing on genes. Maybe my paintings are my babies? Maybe baking cookies with my niece is a way of leaving something of myself behind? Plus, it lets me leave something of my mother and grandmother, and probably their mothers and grandmothers too. 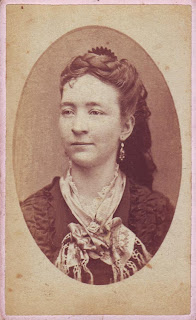 My great great grandmother fascinates me because she was a doctor before women did that kind of thing. There's something in her portrait that commands respect. Laura Elizabeth "Lizzy" (Poulson) Cramer was born April 16, 1854 in Holmes County, Ohio. She died in 1910 in Fredricksburg, Ohio. She was married May 17, 1877 to Bertram "Happy" Cramer, who was a blacksmith. You've got to love a guy named Happy! He was born in March, 1853 in Fredricksburg, and died in 1912. They had 3 children, John (Helen Lemmon), Charles (Ella Snure), and my great grandmother, Jennie Marie (Jefferson Joseph "Joe" Benson). 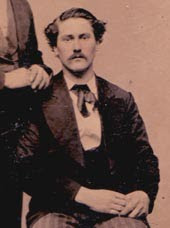 Lizzy used herbs in her healing. I grow them in my garden and make healing teas. My sister Sue is a nurse. The string of blacksmiths in my family might explain why my brother and uncle love making jewelry, or another brother's incessant banging when he was a kid. Happy played the violin, which might explain my nephews' musical talents. Not to mention Happy's father was a type maker, which might explain my love of lettering class in college?
Maybe sometimes looking forward also means looking in the rear view mirror once in a while? I'm also feeling gratitude that I'm not the first packrat in my family interested in history :)
Posted by Linda Hensley at 3:48 PM 27 comments: