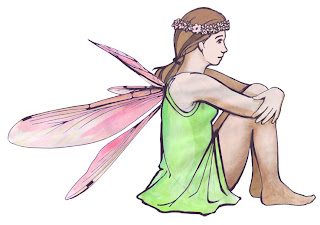 Dad talked about elves and fairies as if they were behind the nearest tree, with a superstitious tension in his shoulders as he explained the ways and laws of their parallel world. "Always treat them with respect" was his most frequent advice. "They don't trust humans" was another of his facts. The main thing I took away from his stories was that elves and fairies could be sneaky and vicious no matter how beautiful they might seem. Walking through a fairy ring of mushrooms could mean death or permanent enslavement in their world.
I laid back and watched dragonflies dancing among the tall grasses and flowers, against the backdrop of blue skies and fluffy clouds, and knew the dragonflies were fairies in disguise. It's always best to be careful. I didn't fear Santa marking down my mistakes on his famous list. I knew the tag marked "from Santa" was in Mom's handwriting. I wasn't stupid. Santa was a myth. Fairies were real. I could feel them in the sparkling grasses next to the water. Listening. They are the spies of the alternate world. 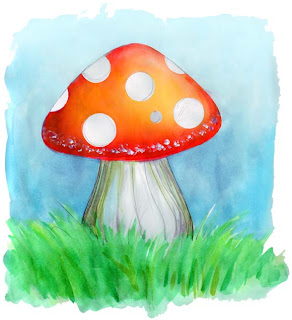 I put my foot inside the fairy ring. Nothing happened. With one foot firmly planted on the outside, I put some weight on the foot inside the ring. Nothing happened again. That night I looked out my bedroom window and wondered if I could see the lights of the fairies' dance, and could almost hear their council deciding whether or not to punish me for daring to question their sovereignty.
The next day I ran through the fairy ring. I figured if I went fast, my feet wouldn't destroy their invisible houses. I nervously watched from my bedroom window to see whether or not they would come to punish me. Nothing happened. The fairies accepted me. I didn't push the boundaries again. I wasn't trying to hurt them, just test my own bravery. I passed.
Some of my all-time favorite books are the series of Faeries and other magical creatures by Brian Froud and Alan Lee.
Posted by Linda Hensley at 9:34 PM