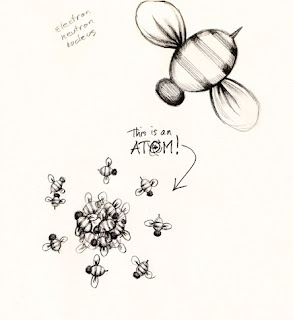 Illustration Friday's word of the week sends my mind in unusual directions.
"Satellite" makes me think of science, and my science education was spotty. I had an obligatory biology class in college, but even the teacher knew it was a joke. I also took biology in high school, but quickly discovered that I was expected to cut up long-dead, soggy animals floating in formaldehyde, and the boys in class thought it was funny to leave them on my chair or drop them down the back of my shirt. I quit going to class, but passed the final, so somehow managed to graduate high school.

I've found studying science is much more fun by hanging out with scientists. One pleasant memory involved a long walk with my nuclear physicist friend, Dr. Philip Ugorowski, Research Assistant Professor at Kansas State University, Mechanical and Nuclear Engineering Department. He told me to forget the classic image of an atom as a solid ball with a smaller solid ball orbiting around it. I didn't need to forget it. With my spotty science education, I never learned it in the first place. He talked about the nucleus as a jostling swarm of bees, and I happily absorbed his explanation of the orbiting electrons as more bees, or maybe gnats.

We drank wine, enjoyed the sun and trees, and he waxed poetic about nuclear fusion with a lot of laughter about which insects best represented the different functions of atoms and molecules. When he started on fission, I said we had to stop because my brain was too full and couldn't accept any more knowledge at that time. Sometimes it occurs to me that we've never revisited fission, so my education remains incomplete.

It was a satisfying day, and a good memory. I cannot think of atoms as anything other than some assortment of buzzing insects that are full of life and energy.

I gave Phil a chance to comment on this blog posting...

The usual picture of an atom is the little balls orbiting the nucleus, which looks like a clump of balls. That picture was outdated by the end of the 1920's, but it was used as the logo for the Atomic Energy Commission (now the Nuclear Regulatory Commission), entered popular culture, and now there seems to be no getting rid of it. I think you have the right analogy for the nucleus, but the "orbiting" electrons are a little tricky.

When we say "orbit" we think of things like moons (natural satellites) or artificial satellites. Even the Milky Way galaxy has two smaller galaxies (the clouds of Magellan) orbiting it. The lighter mass goes around the heavier mass, but even the heavier mass moves in a small circle. The motion of the earth perturbs the suns' motion slightly. The electrons around the atom are more like clouds with areas where you might find an electron and areas where you would not. Since the electron acts more like a wave than a ball in this situation, it goes between the areas where it may be found without passing through the areas where it may not be found, even though the "forbidden" areas lie between the "allowed" areas. Thus, it does not "orbit" like a satellite, even though in chemistry they talk of "electron orbits".

What happened to the whimsy of buzzing bees? I think I should've given him some wine before asking his opinion of my post, or maybe not written when he's at work? I said as much in my email response, and he added the following...

BTW, the clouds of Magellan are called "satellite galaxies" if you want to include that. Today my head is filled with numbers and spreadsheets, so my poetic neurons are taking a break.

Let's just hope Phil sorts out his budget and gets some grants for funding. I don't think I'm going to progress science too much with doodles of buzzing bees!
Posted by Linda Hensley at 9:56 AM 9 comments: 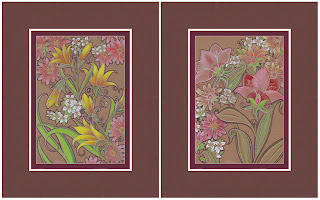 I love paisley. Paisley is pretty flowers organized in a rational, mathematical, 2-dimensional garden. I like paisley on ties, boxer shorts, carpets, curtains, or anything in a gypsy fortune teller's shop. It's lush and sensual, familiar and exotic. I smell jasmine and hear Aladdin rubbing his lamp at the cave entrance.
I did the drawings above in colored pencil and silver marker. They are each 20" x 24", matted and framed, and are available if someone is interested in purchasing them. I did them because I enjoyed creating paisley at work so much, I came home and made these for fun.
My experience in packaging includes printing paisley patterns around unusual box shapes, and such intricate patterns can be challenging to meet on the overlapping edges, but the results can be striking. Mixing and matching patterns and colors is also a challenge, but well worth it if you have the time to beat these things into submission. The patterns shown below were used by Barton's for a set of gift boxes. If you'd like to see more of my packaging, go to my website at http://www.artbyhensley.com/. 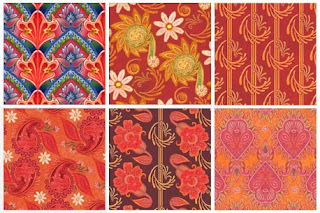 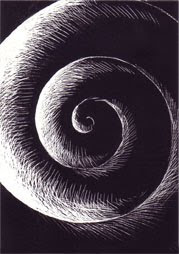 There is a really nice fundraising effort going on to help with the BP oil spill, and artists can help by donating an image pertaining to the gulf on a 2 1/2" x 3 1/2" card. Jpegs of the cards can be submitted to ripplesketches@verizon.net.

Cards are available for a $10 donation (each) to either The Institute for Marine Mammal Studies http://www.imms.org/ or The International Bird Rescue Research Center http://www.ibrrc.org/ . When the cards sell, artists sign the back of the art with thanks and mail them to the buyer's address. 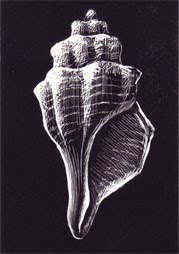 The Ripple blog is http://ripplesketches.blogspot.com/

I'm grateful to Penny at http://illustrationfriday.com/ for choosing this worthy cause as the inspiration for this week's word, and encourage other artists to contribute to the effort.

These seashell pictures are on scratchboard because I think the black backgrounds feel like the black oil, but I'd rather focus on the beauty of the gulf, and what's prettier than seashells? 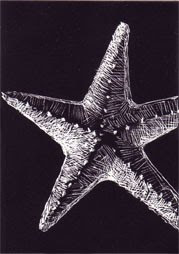 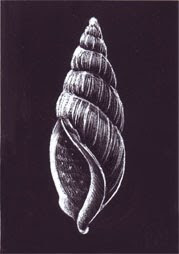 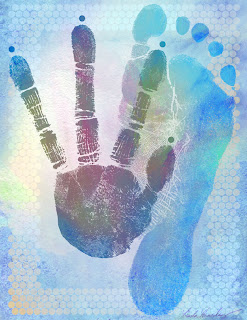 Ohio is stereotyped as a prosaic and staid place. Endless farms of soybeans and corn make a picture postcard of wholesome living, hard work, and conservative values. Moo.

I'm from Cleveland though, and that area is stereotyped differently. When I was a child, the Hough race riots were raging and factories spewed out chemicals until the river caught fire. Thankfully, I wasn't in the middle of all that action. I grew up in a very secluded, wooded area 20 miles from the big city.

There are a lot of strange things in those woods, and if you talk to the right people, there are a lot of stories and opinions about what might be hidden in there. I talked to one otherwise sane woman who swears she sings to Bigfoot at night, and that Bigfoot sings back. She's probably right, or maybe it's a feral cat in heat, but I'm not going out there at night to find out. We also have a long history of legends about "Melon Heads", which depending on to whom you talk, are human-like creatures that hide in the woods and have been said to attack young lovers kissing in the dark. 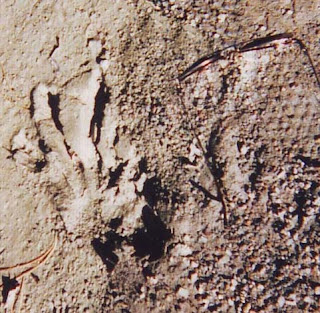 Ohio has eliminated any real predators, never really had poisonous snakes or bugs, and in most of the usual ways is one of the safest places to live -- unless you want to count our records for serial murderers and cults, but there's no reason to get into Charles Manson or Jeffrey Lundgren, unless you also want to count in the fact that the Mormons flourished here while Joseph Smith was having his revelations.

So why the mini-history lesson, and how does any of this relate to "Trail"?

Because I grew up in the woods and learned early to trail things. The usual things to trail were deer, rodents, and birds, but one day I found these tracks, and my heart started pounding, which is exactly the same reaction I had when I saw the same footprints when I was a child. Keep in mind that I was in those woods every day for years and years, and only saw this track twice in my life. 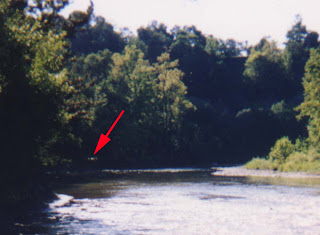 I went home, called my uncle to find out how to make a cast of the footprints, then went back with camera and plaster. I took pictures of the surrounding area, and other oddities showed up in my pictures, including lights in the woods where there shouldn't be lights -- but in only 2 of the 4 pictures taken of the same place in the same direction. 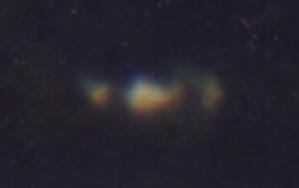 The prints are about 6" long, and were made in heavy clay. That means whatever made them was heavy to make such a clear, deep impression. A footprint of a man's shoe in the same clay is very shallow in comparison. After talking with naturalists at the local park, the best explanation I've heard so far is that this is a beaver track, but to be honest, they really didn't seem to know, and got out the guidebooks to grasp at that straw, plus they were ignoring the fact that the toes aren't webbed. It would've had to have been an enormous beaver. They do live nearby, but I'm open to other suggestions.

Besides, I like the idea of Bigfoots and Melon Heads living in the woods. What is life without a little mystery?

I took the shadow from the sunglasses in the photo because it was distracting. Otherwise, the photos are as is. The art is a combo of watercolor, print, and PhotoShop. 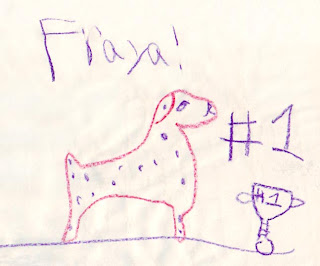 For those of you who read my March posting about my dog Freya coming up on her expiration date, she finally reached it Memorial Day weekend (May 29). The attached picture was created by my niece last winter.
Posted by Linda Hensley at 1:03 PM 6 comments: