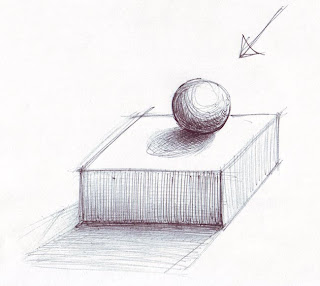 I watched “Food Inc.” on PBS last night. Seeing various factory methods of killing and butchering livestock is almost enough to make me a vegetarian. Almost, but not quite, since our factory produced produce is also disgusting. Saying I “watched” the show isn’t exactly true though. I furiously doodled the night away in an attempt to avoid looking at unhappy animals knee deep in their own manure and worried looking chickens watching their compadres getting their heads cut off. I guess some good comes out of my random doodles and a too-graphic show. I randomly sketched shadows, and wouldn’t you know it, Illustration Friday’s Penelope chose “shadows” for the word for the week. Yay! I’m ahead of the game this Friday. I give Andrew Finnie credit for the inspiration since he made a comment about how difficult it is to make the right shadow for a girl’s head on a pig. He makes me laugh. 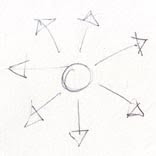 Here’s the thing about shadows: first identify where the light is coming from. If it’s outside, that means the sun. Is it morning, noon, twilight, or a moon? Not counting street lights and such, outside pictures usually only have one light source which is pretty easy to identify. Inside pictures can have multiple light sources which can make everything more complicated, but let’s stick with a single light source for this particular post, and assume the light is going to travel in straight lines. Multiple light sources are just variations on these themes. 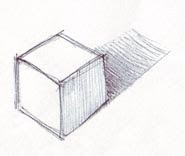 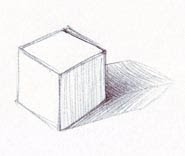 The second important thing to remember about shadows is that they follow rules of perspective. Things are bigger the closer they are to you, smaller the farther away they are from you. That doesn’t necessarily mean that the light is going to line up perfectly with your buildings in a landscape. If you want things easy, then line things up like first cube. More likely, you’ll have to figure out how the shadow is cast by 2 sides of your cube. You’re the god of your art, so make the sun where you feel like having it. Just remember that even virtual worlds make more sense when your world has a logical system. 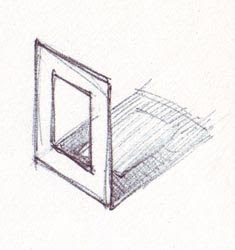 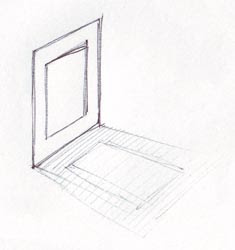 Another thing about light is that it can leak around like water. Maybe I’ll talk about reflected light in a later post, but for now, let’s just assume that the shadow will be darkest at the bottom of an object, and lighten the farther it gets away from that object. The stronger the light source, the stronger the shadow. A sunny day will have harder shadows than an overcast day where the light gets bounced around through the filtering clouds. Making the shadow strongest at the bottom helps “ground” the item in your picture. 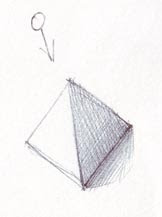 Speaking of ground, I finally got enough sun to dry out my garden and I’m going to plant things today. I planned to do that anyway, but PBS has definitely motivated me to have some non-factory food this summer.

Completely unrelated to shadows or food, I’m doing a garage sale this weekend. On the list of things that are going to find new homes is a leather jacket my brother painted and abandoned at my house. I just don’t think it’s my style, but I do find it interesting enough to show you some pictures. If anybody knows how to read runes, what does this say? Brian’s not telling. 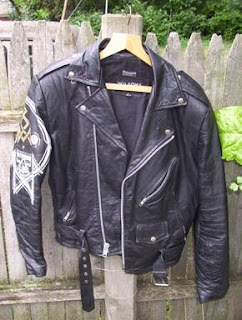 Posted by Linda Hensley at 8:19 AM