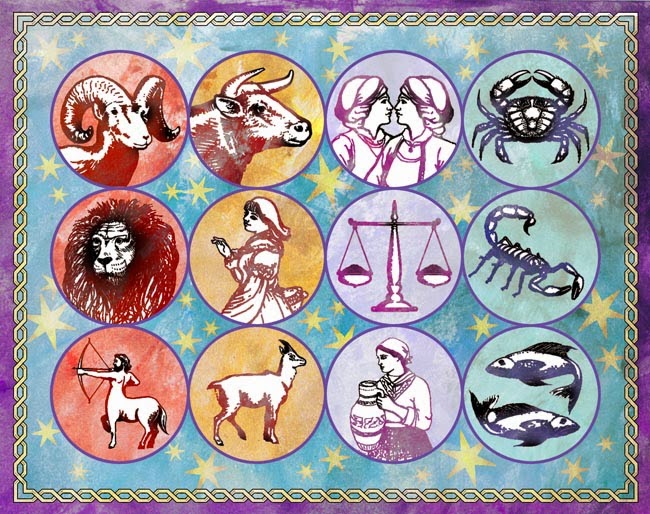 I went to a birthday party when I was in high school and celebrated somewhat too heartily with 5 girlfriends who shared a birthday.  "Hmm", I thought, "birthdays might be worth noticing?"

Thus, I noticed astrology as something besides a punchline in jokes of the era and discovered an interesting way to sort people.  If you've read this blog before, you'll know I think sorting people by color is pretty stupid because it really isn't very informative.  Sorting by birthday on the other hand is completely logical -- even if I don't understand the logic.  I am considering someone else's theory that it's based on the food cycle and family activities at different times of the year.

So, now we're in Aries and I have a big clump of people with birthdays right around now.  I notice they've got some similarities and can decide whether or not I like these people, how best to get along with them, etc.  Sorting by the zodiac limits people to 12 signs, and I'm pretty capable of handling essentially 12 people, especially since I can cross off some I never willingly talk to in the first place.

It's made dating easier too.  Most of my significant relationships were born within a week of each other, even if in different years.  Sometimes I've viewed this as revisiting a situation until I can work out a solution -- though I did get fed up and branch out to Pisces men, who were born within the same week of each other.  I really didn't plan this.  It just happens, and I notice.  (Which all sounds like I date a lot and I don't.)

In my many years of noticing, I also discovered a lump of people in my life that were given to me instead of me going out and getting them.  Twin brothers obviously share a birthday, but what about what about having 2 serious relationships with men born 2 days apart who also have mothers born on the same day?  Plus that Pisces who has a son born on that day?

I could go on, but the inexplicable nature of what I notice keeps me interested.  I read my horoscope in the mornings, but I don't really take that very seriously.  If it says "keep your mouth shut today or you'll tick off your boss and get fired", well, I'd probably keep my mouth shut just to be on the safe side, but otherwise it all seems pretty superficial.

One time I took my chart and a brother's chart to an astrologer and asked why he and I can't peacefully coexist on the same continent.  Our charts are remarkably similar, but he has Mars or Pluto or something in a different spot and whatever it is made a world of difference to her.  I suppose I could take it to a Chinese astrologer and find out that Ox and Dragon are combustible, which actually makes a little more sense to me.

All of this is kind of like filling in Sudoku puzzles for me.  I keep trying to figure out people, and the zodiac gives me a filing cabinet to sort things.  I'm Virgo rising.  It all makes sense if you think about it.
Posted by Linda Hensley at 8:04 AM