I don’t suppose many people think of Cleveland as a booming theater town, but it is.  We like our shows.  Our theaters are more beautiful than the ones I’ve seen on Broadway, but we almost lost them all.

PlayhouseSquare consists of 5 grand theaters.  They were built 1921-22 for plays, silent films, and vaudeville.  When people moved to suburbs the theaters suffered.  All but one of the theaters were boarded up by the 60s.  Rain dripped through the ceilings, the ornate plasterwork turned into damp sludge, murals molded… 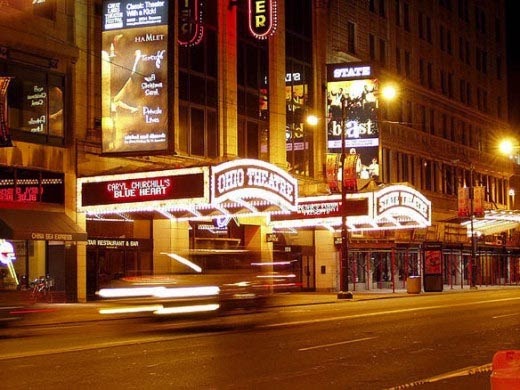 The theaters were a mess, and the city wanted to tear them down – which bothered some people so badly that they got together and saved them.  It was a heroic effort, and I was fortunate to be working downtown and see a lot of it going on, even more fortunate to be able to work in one of the theaters while the artisans stripped things down and redid everything.  The before and afters were amazing. 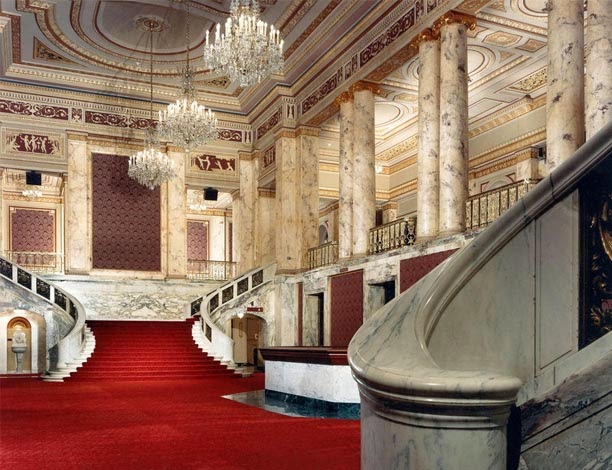 It was the “world’s largest theater restoration project,” and now Cleveland has the country’s largest theatrical center outside New York City.  More than 1 million people attend each year. 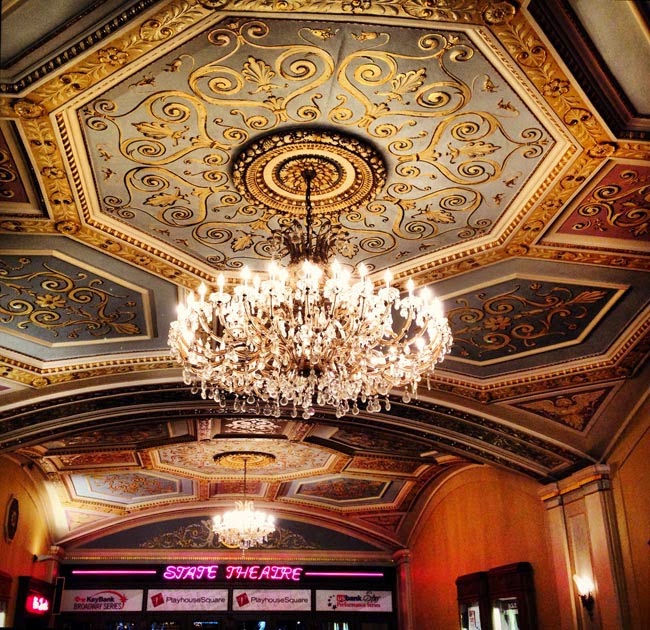 When I was in Chicago recently, I told my friend about getting a backstage tour of the Chicago Theater.  My bf and I were peeping through the windows when the janitor saw us.  He took us on a private tour of back halls and showed us where the greats of bygone ages dressed and the pieces parts of a complex that fills an entire city block – which at the time was showing a B movie to a scant audience.  It’s one of those special experiences that remains vivid to me.  Seeing the Chicago Theater unloved makes me even prouder of Cleveland.

I love shows.  The fact that I’m soft-spoken and introverted might make you think that I wouldn’t appreciate grand, theatrical expression, or that I’d actually run a community theater, yet I did.  I even ran the program at a profit, which you won’t hear from anybody else.  I loved being backstage, just like being backstage in Chicago.

I cried during a flute audition, laughed at dance auditions, scratched my head over the sound and lighting systems, sold advertising, begged audiences to fill out contact information, browbeat the director, thanked the cast and volunteers, set up chairs, helped cook for dinner theaters…

Loved it.  I didn’t know how to do any of it before taking that job either.  Sure, I had cooked before, or done advertising, and other things like that, but nobody told me how to put it all together.  Maybe if I’d known how much was involved I might’ve been too overwhelmed to try, but I didn’t know, so I just did it.  I bet the people who saved PlayhouseSquare didn’t know how hard it was going to be to save a theater district either, but look at what they did.  It’s gorgeous, and a joy to everyone who goes to a show.

If there’s anything to take away from all this, it’s try.  What is the theater about anyway?  Fantasy makes the world go round.  First we have to be able to dream it, then we can do something to make our dreams come true.

P.S. Thanks for everyone’s kind thoughts in response to the sad news that my friend died last week.  I especially appreciate your prayers for her husband, Tim.

P.P.S. My coworker Sue lost her husband this weekend.  Please remember Sue and her family in your thoughts and prayers too.
Posted by Linda Hensley at 1:46 PM