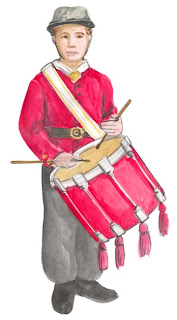 I’ve been thinking about the Occupy Wall Street movement a lot lately. I don’t know how much people outside the US are aware of this movement, but the basic premise is people camping in public places in different cities as a nonviolent protest against the extreme wealth of the top 1% and the resulting anger of the remaining 99%. Well, I’m definitely in the 99%, but I really don’t want to camp in the cold to point that out. Various cities have started clearing out these encampments, often with harsh methods including spraying tear gas in the faces of people quietly sitting with their heads down. If the police wanted to shake my benign, hands-off attitude, they’ve done a wonderful job of it. I still don’t want to camp in the cold, especially if I could get tear gassed, but I’m feeling more motivated to express my moral support for the people hardy enough to do it. Something has to change.

The problem is, I really don’t know what to do. The playground bullies have a firm grip on business and politics, and they aren’t going to let go. I don’t have the money or influence to fight them with their own weapons, and I don’t want to let them drag me into that kind of a fight anyway. All I can do is say what I think and hope that others will agree and start speaking up.

My class was eating lunch in the cafeteria when I was in second grade. A girl demanded my apple. She offered to trade something insignificant for it. My hand was in motion when I realized I really wanted to keep my apple. I said “No”. All of the faces of my classmates snapped in my direction to see what would happen next. This wasn’t the first time Rosalyn had extorted food by charm and/or implied force. I could feel the hopes of my classmates riding on my resolve. Rosalyn backed down. When she tried her move on another kid the next day, she was met with another refusal. When she chose the weakest member of our pack, the rest of us stood up and told her to back off. Rosalyn learned to play by the group rules, and I was blessed to have the nicest class in our school.

In a way, this was a really insignificant moment in time, but it changed me. I learned to say “No”. I learned that the rest of the class was just looking for someone to say it first. They just wanted to hear the drum to know which way to march. I’m listening for a drum too to show me what I should do next. We are the majority, and whatever happens with the Occupy movement, at least they’re trying to lead the brigade by beating the drum. 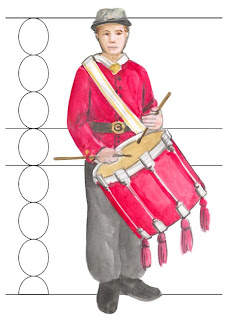 I have to admit that I didn’t really put my heart into my drummer. I was thinking about my general despair about the state of the world, but I really can’t ignore lazy anatomy. Instead of just fixing it and pretending I had it right in the first place, I decided to offer a basic lesson…

The size of the head is a standard measurement for the entire body. Despite what you might see in magazines which stretch bodies to 9, 10, or more heads tall, the average adult is 7 ½ heads tall. Basic points of measurement are the waist and elbows at 3 heads from the top, the crotch at 4 heads from the top. Keep in mind that we’re just talking the size of a bald head without factoring in hair or hats. Babies have bigger heads in proportion to their bodies.

I stretched my boy into less dwarfish proportions in PhotoShop, and narrowed his shoulders so he looks a less like a linebacker. I probably ought to fix his hands too, but I never meant this to be fine art in the first place :)
Posted by Linda Hensley at 10:13 AM