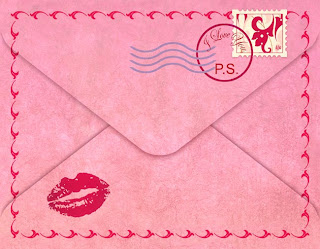 When Grandma died and we were moving Grandpa out of their house, I kept a lot of things that were meant for the curb. I didn’t want to let go of Grandma or the house. Keeping things that mattered to her helped me feel like I had something to keep her close. I was studying genealogy at the time and especially kept things I thought might help me verify family connections. Hence, postcards. Too bad the most interesting postcards didn’t have a thing to do with my DNA since they were written to my Great Grandpa (and his family) who was my Great Grandmother’s third husband, and not Grandma’s biological father. Even so, I knew Grandpa Winters, and it’s interesting to see that he was alive at the same time of steamboats (b. January 19, 1884). Time is a funny thing. Through Grandpa, I’m only separated by steamboats by 1 degree. The log cabin was from a relative of my Great Grandmother’s second husband, so not a direct relation either. I just find it fascinating. I’m not sure who Jerome Brown was, but I find that photo of Tokyo pretty fascinating too. Tragic, but interesting.

I’ve copied the messages as written, including misspellings… 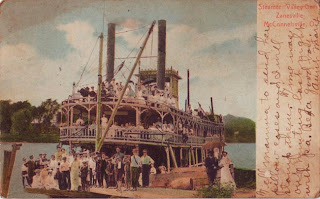 To Master George Winters, Kokomo, Ind.
Jan. 20, 1913
Hello George
How are you by this time? Mabel got her ring last night (Sat.) and she said it was a daisy. She wears it all the time. George - Grandma and I are sending you a big box so write and tell me if you get it. Tell Mamma to send her pillow cases and I will stamp them. Time was out hunting last night with Pa. Be a good boy. Aunt Mary 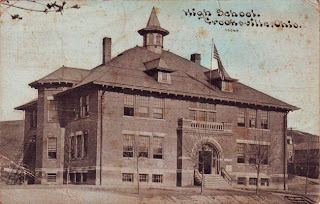 Oct. 10, 1912
To Mr. Wilson Winters, Kokomo, Ind.
Dear Wils
You can now rest at ease for everything is alright at home. I am really telling you the truth about George. Mary W.
(This was written after a series of increasingly dire postcards predicting George’s likely death. He apparently fully recovered, grew up, moved to California, and made a million dollars. Good for him, but drat, why wasn’t he a direct relation?!) 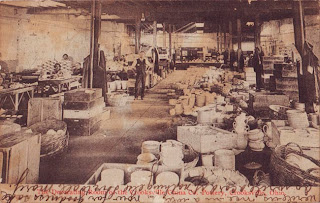 Decorating Room of Crooksville China Co. Pottery
April 25, 1916
To Mrs. Rhoda Winters, Kokomo, Ind.
Dear Sister: Why on earth don’t you write? Are you sick or what is the matter? Mamma will be crazy if you don’t write soon. Papa said last night he thought it was strange you hadn’t wrote. We are all well and busy as bees. Susie worked Sat. night until 12 oclock and was all in Monday but is rested up now. Mabel thot easter was great. Did George get his box? I was going to make him candy but didn’t have time. I think he might write us once in a while. Now for goodness sake do write a card if nothing else. Love to all. Mary 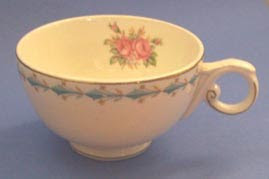 (Mary nagged a lot about writing :) Grandpa worked at a lot of the different pottery factories in Ohio. He hated it, and would’ve rather been a full-time farmer. I grew up with a lot of Hall Pottery like this cup and teapot, and like to think of Grandpa making them.) 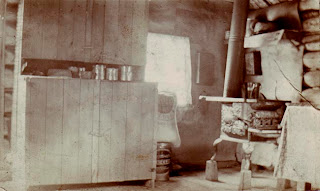 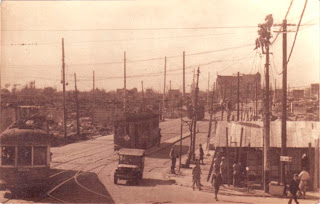 *Note for posterity – Mom says Grandpa’s last name was Winter. Mom ought to know, but I always called him Winters with an ‘s’ at the end. Some of the postcards are one way, some another, but most have an ‘s’ and the card for his funeral had an ‘s’ on the end, so I’m going to continue with the ‘s’ until I find proof positive of the true spelling.

The envelope at the top is part of a set of boxes I did for 1800 Flowers.
Posted by Linda Hensley at 9:58 AM