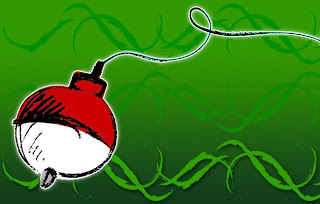 I “borrowed” my dad’s new fishing rod once. He was very proud of it. The length of charcoal gray graphite gave him an ecstasy I didn’t really understand, but I took it with a clear understanding that getting caught in my theft might constitute a death sentence. I suppose I was certain that I could return it without him finding out about it. I didn’t count in the thought that he might get off work early that day. I didn’t consider that I could get caught red-handed with it when I was standing in the river, unable to flee to safety.

A fish jerked the rod out of my hands just as I turned to see Dad running down the hill towards me, and I saw a tough older boy running further downstream. “Vince stole your fishing rod!” seemed like the most logical connect-the-dots thing to say at the time. I don’t care if I was a little kid, and lying is a thing little kids do. I knew better. I don’t care that Vince was a rough, bullying kid either. Just because he’d done plenty of other nasty things, he wasn’t guilty of this. I started to feel shame even as the words flew out of my mouth. Vince isn’t his real name. I won’t add to my sins by naming him now.

Dad must’ve known I lied, but he told Vince’s father about the theft. Then Dad walked me past their house while the heavy slash of the belt and screams filled the air amongst the shouted obscenities. That was the way things were back then, which isn’t to say I condone that kind of thing. My remorse was real, but I couldn’t go into their house to say I lied. Vince’s father was a scary man, even without a belt in his hands. Besides, if I confessed, then I’d be the one getting the belt and Vince was already wounded by that time. Thus started a 20+ year penance of shame, guilt, remorse cycle. That cycle got even worse when I was wading in the river and stumbled into the algae covered wreck of Dad’s pride and joy fishing rod. Years of spring floods had only moved it about 10 feet from that fateful last sighting – which understanding the laws of river physics, is damn near impossible, and yet, there it was. It wasn’t even pinned down by a rock. It just laid in the place where it had sunk so many years before. Dad and Vince’s father were both dead by that time, Vince was even bigger and scarier than he was as a kid, and there was no redemption for my sin. Repentance sucks.

Some years after finding the lost rod, I ran into Vince in a fashionable bar. We were both drunk and happy at the time, and I confessed and asked for forgiveness. I suppose it was a selfish act to admit my remorse because I wanted to feel better about it, and my sister later said that was incredibly stupid since Vince still has a hot temper, but Vince laughed about it. He said he didn’t remember the incident, and what’s one more beating out of the many beatings he received? I don’t think it’s true though. Whether or not he remembers that particular incident, he now knows that I’m sorry, that someone else knew about the whippings, that someone else cares. It’s never too late to say you’re sorry. It won’t change past events, but it might help us look at the past with different eyes.

In the olden days, before selling indulgences to heaven or Martin Luther, confessions used to be given in the full light of the Sunday congregation at church. There was no hiding. If you sinned, you had to tell all of your friends and family what you had done. That’s real repentance. No hiding in a dark closet to confess your secrets to a priest with a chain of prayers for penance. Kneeling in the dark by the side of your bed didn’t count either. In the olden days, the people sinned against had some justice.

Solstice (December 21) is a traditional time of contemplation, letting go, forgiveness, and hopes for the future. The darkest days of winter lengthen into light, and we can let go of things that hold us back. If we can help lighten someone else’s load, even better.